It’s strange but true. The victory of Donald Trump in the recently-held US elections raised a big ruckus in Nepal. This could be perhaps because we Nepalis are more concerned about what happens in a foreign land than what happens in our own homeland. We all know that when the Twin Towers in the . . . Read more » Nepal observed its Fifth National Tax Day on November 16, with the slogan that translates to something like “Let’s Pay Tax and Feel Dignified to Help Achieve Our Aspirations for a Prosperous . . . Read more » The government has finally registered a Bill in the Legislature-Parliament to amend the constitution for a second time, as demanded by the United Democratic Madhesi Front (UDMF). However, nobody – . . . Read more » “We are thinking of setting up a manufacturing unit in Nepal”

Indian personal care manufacturer CavinKare has had its brand presence in Nepal spanning a period of 20 years. The company has 28 products in its portfolio including hair care, hair colour and skin care. Recently, the company appointed Rajesh Hamal as Nepal Brand Ambassador for Indica Easy hair colour. . . . Read more »

Part of the USD 1.6 billion Indian industrial conglomerate CK Birla Group, Orient Electric is the largest exporter of fans from India with every second fan exported from the country being labeled under the Orient brand. Established in 1954, the company has become a consumer electronics and lighting brand with a range of modern kitchen and home appliances, smart lighting systems, expanding to switch . . . Read more »

Started as Anmin Pharmacy in 1899 in Osaka with the launch of gastrointestinal medicine Ikatsu, Rohto Pharmaceutical is a Japanese multinational FMCG and over-the-counter (OTC) drugs manufacturer. The company has been offering a range of products including non-prescription medicines (OTCs), beauty products, and health supplements to its . . . Read more »

We are aware of the fact that the story of Kmart and Wal-Mart illustrates the newer dimensions of competition during the 1990s. It has been noticed that in one after another of the industries, . . . Read more » The decades old economy model of take-use-dispose is being replaced by a take less-use to optimum-eliminate disposal one. The search, experimentation and success of models that are restorative and . . . Read more »

It is reported worldwide that aid whether food, medicines, clothing etc donated during natural calamities or other types of disasters reaches the target group only 20-25 percent of the time and the . . . Read more »

Cameras have become central in any smartphone these days. As the photography frenzy, especially the ‘selfie’ craze, has gripped the users, the more powerful the imaging system of . . . Read more »

Getting Organised by the Doctor ! Making the Most of Your Diary

Every year most business people across Nepal get a gift of a diary. A nice thick book, it has plenty of nice pages inside as it proclaims all of the dates for the upcoming year. And for the vast majority of Nepali businesspeople, the book is a waste of money. Why? It is because most diaries are not properly utilised for effective business . . . Read more » With the passage of time and globalisation, the internet has become an intrinsic part of modern day life. It has developed into an easy and reliable way of shopping, connecting with people, renting . . . Read more » Nestle, the Swiss multinational company, has been selling its confectionary and food items in India since 1961. It also owns a 70 percent market share in the popular packet noodles with its brand . . . Read more »

Bestselling books on business usually have something remarkable about them. And when the subject of the book itself is to draw attention to the remarkable then it has to be something . . . Read more » Hyatt Regency Kathmandu recently won the ‘Nepal Leading Hotel 2016’ award at the World Travel Awards held in Vietnam. The five-star hotel has bagged the recognition for the fifth time. It . . . Read more » 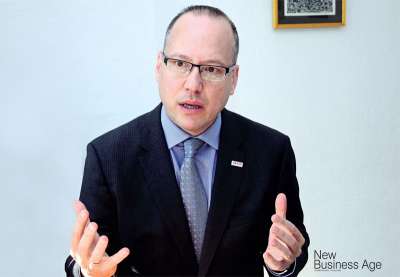 Taza : Flavours of the Middle East

Located on the busy Pulchowk road, Tazaat first seems unassuming, barely ruffling the waters of the crowded pond of Lalitpur dining when it first opened its doors two years ago. But the main business . . . Read more »

With the increasing demand for handsets the intense competition in the market has been unrelenting in recent years. Almost all major global and regional handset brands have entered Nepal or are . . . Read more »

The multipurpose bamboo plant has found a special place in the furniture business in the recent years. This quick growing grass plant is garnering worldwide popularity with people looking for . . . Read more »

CSR: HOW DOING GOOD FOR SOCIETY IS GOOD FOR BUSINESS Many companies in Nepal are engaged in various activities of social importance. From education and health, livelihood of marginalized communities, infrastructure development in rural areas, . . . Read more »

CSR Initiatives of Some Companies in Nepal

At present, many businesses in Nepal have integrated CSR and philanthropic activities into their day-to-day operations. The consciousness of social responsibility has led them to share their profit with the . . . Read more »