The Taste of Federalism

The rituals to bring federalism in Nepal are over now. Now, the power to govern has reached the villages in the country where various types of governments have been formed. Earlier, there was only one type of government - the one at Singha . . . Read more » The Nepal India energy secretarial level Joint Steering Committee (JSC) meeting is expected to commence soon once the Nepal’s government takes a full shape. It is understood that one of the focal . . . Read more » Going by the previous precedents, there are abundant cases and examples to substantiate that the succeeding governments took several decisions on the retention, transfer and promotion of the civil . . . Read more »

SWITCH : How to change things when change is hard

For any change to happen, someone has to decide something and start acting differently. It can be you, your team or even your . . . Read more » Hydropower Investment and Development Company Limited (HIDCL) was established in 2011 by the government as a Special Purpose Vehicle (SPV) to expedite hydropower development by forging partnerships . . . Read more » True entrepreneurship is showing the zeal to step into areas that are different from one’s academic or professional background. Sabal Chandra Shah, managing director of Garud Securities is among . . . Read more »

Alpas: A Mix of Elegance and the Casual

Located on a side street in Lazimpat, Alpas is an excellent, creative, and modern restaurant with an ever-changing menu listing some unusual dishes. Opened only six months ago, this restaurant, over . . . Read more »

Norvic Hospital has adopted a new approach to provide better diagnosis and treatment to gastro patients in the light of increasing gastronomic diseases. The hospital has recently opened the 'Department of General, Gastro Intestinal and Laparoscopic Surgery' . . . Read more » In the last few years, the hotel industry in Nepal has attracted more and more investment. Nepali entrepreneurs are opening new hotels, expanding existing ones and have partnered with several . . . Read more » For Sudeep Basnet, after more than a decade of experiencing corporate leadership training programmes, coaching became an area he had to explore himself. Basnet, a lead trainer at Success Inc. has . . . Read more »

Two important elements of leadership which are radically dependent upon the particular theoretical approach used: The extent to which uncertainty could and should be eliminated from the appraisal . . . Read more » Established in 1989, Temple Tiger Green Jungle Resort is a pioneer in Nepal’s wildlife tourism. Originally situated in Chitwan National Park, the resort was re-located to the buffer zone area at . . . Read more » 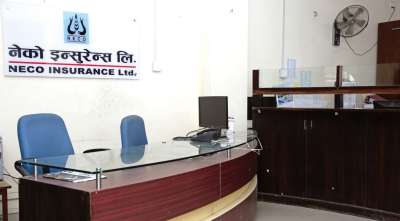 Established in 1994, Neco Insurance expects to become the most preferred general insurance company in Nepal. The company which is promoted by Rastriya Banijya Bank, Mahato Group, Vinayak Group and . . . Read more » At a time when Nepal is observing rapid progress in hydropower development, one 17 year old company has been helping the country in its drive to electrification. Established in 2000, Cosmic . . . Read more » Intellectual Property Right (IPR) plays a vital role for economies to thrive in today’s competitive world. Countries have been adopting rigorous legal and technical measures to secure the . . . Read more »

A trademark often referred to as a ‘creation of the mind’ is an intellectual property. UK law defines a trademark as “a sign capable of being represented graphically which is capable of . . . Read more »

Intellectual Property (IP) is an essential tool for the economic development of any country. Four factors that drive the engine of IP smoothly are creation, promotion, protection and use of IP. In Nepal, there is no dearth of creative activities coming out from academic and research organisations as well as technical professionals who produce literary, artistic, musical and scientific . . . Read more »