At a time when the government has failed to add any meaningful momentum to the country’s economy hard hit by the Covid-19 pandemic through the Federal Budget, the central bank has reignited the hopes of the private sector by announcing a slew of relief and rescue measures to help the . . . Read more » Nobody admits to it. Everybody protests when others do it. But there’s hardly anybody who doesn’t do it. What is it? The answer is – corruption! If it is something that everybody does, why go . . . Read more » The first Nepal-India joint venture bank Nepal SBI Bank Limited (NSBL) recently celebrated its 27th anniversary. Over the years, the bank has established itself as a major player in the Nepali . . . Read more » Born to famous artist Ramananda Joshi, she grew up in a very artistic environment. Seeing her father paint had created a kind of interest and attraction towards art in her. “My father used to say . . . Read more » Amid growing pressure to resign as both party chair and prime minister, KP Sharma Oli in mid-July floated the idea of holding the unified general convention. The proposal was backed by the party’s . . . Read more » On a regular Friday, Kathmandu Burger, situated in a prime spot in Thamel, would be packed with customers. The burger house that started its operation four years ago would make average transactions . . . Read more » 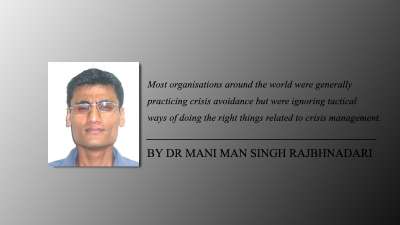 Of all superhero alter-egos, I always had a little more sympathy for Peter Parker (adapted by Sam Raimi). Not because of his unrequited love for Mary Jane Watson (for most movies) or that most people . . . Read more » Sanjib Subba’s storied and multi-faceted career speaks to one of his fundamental tenets as both an individual and a professional - the yearning for a challenge; the drive and desire to learn, adapt . . . Read more » With the progress in information technology and the Internet, many governments around the world have started the concept of eGovernance in regard with public service delivery and conveyance. However, . . . Read more »

Nepal government has given due priority to agriculture since its first periodical plan. Fertile land and abundant water resources are regarded as the god-gifted assets of the Nepali agricultural . . . Read more » In today’s highly integrated world where ties between countries are defined by their trade relationship and cooperation between them rather than conventional alliances, economy and diplomacy go . . . Read more » The United States has unilaterally pulled out from negotiations on OECD’s effort to forge a global consensus on taxation of digital services. The US Secretary of the Treasury, Steven Mnuchin’s . . . Read more »

With more than 1800 kms of open border, it is natural for Nepal and India to have greater trade, investment and economic linkages. The dimension of socio-economic relation is multifold. It is not only about the trade and remittance. . . . Read more »

The Truth Behind Nepal-India Trade Relations