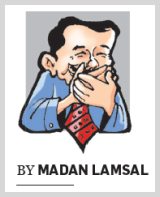 It’s been like rubbing salt into a wound. Our cities and villages have already been reeling under the Covid-19 pandemic and now they are faced with another wave of economic recession and a liquidity crisis. The government was expected to extend a helping hand to the people in these times of crisis but that hand is reaching into our pockets! As the government keeps announcing hikes in taxes, it can’t spend the money for development. We expected progress as we thought the party leaders and cadres were finally at the helm but they turned out to be power brokers. What should have happened is not happening and what should not have happened is happening.

Therefore, nobody, that is apart from the government, should be happy right now. Because the country’s economy has gone beyond comprehension. The hands of the people and those running the industries are empty. But the profits of banks and the importers are on the rise and the government coffers are full. The people’s disappointment, too, is peaking.

It’s said Nepal, too, is at risk of the Omicron variant of the novel coronavirus that started in Africa. But there is nothing to worry about. Because the politicians, by gathering a huge mass of 500,000 people in Chitwan, have already tested and concluded that this virus doesn’t get transmitted to Nepalis!

We keep saying we are in the course of a democratic exercise. But our exercise is unique. We are in a great democratic exercise of electing leaders based on baloney or the barrel of a gun. Elsewhere, there is a list of voters but here names are distributed as winners even when no vote for the same has been held. Looking at the process of electing the office-bearers and central members through the general conventions of the so-called big political parties, it seems as if they are not choosing their leaders but their gods are, who you can see but cannot question. You risk being attacked by their cronies if you dare question their leaders. Satirist Bhairav Aryal wrote long ago – “Don’t question the leaders. In a parliamentary democracy, party leaders are the gods!”

And look at the cadres! You can read their attitude on their faces; they consider their leaders no less than gods! That’s why they stand in front of their leaders like devout pilgrims in front of the statues of gods silently begging for different things from them. Perhaps they are daydreaming that their lords who they have elected will return the favour in the future. How would these naïve souls know that there already exists a class of people who make offerings to get such favours?

We have many instances where the parties which consider themselves as the country’s biggest party- and synonymous with democracy, vowing time and again to be working for the country’s development- haven’t allowed parliament to function for months. They haven’t even spared the streets where patients being rushed in ambulances could not be taken to hospitals on time as their cadres had occupied the roads in the name of their general conventions. They do their politics in the name of the people and the same people are forced to die on the streets? And we have to trust their assurances? What an irony?

What is even more funny is the fact that the same political parties which thrive because of black-marketeers and invisible and illegal foreign assistance are harping on about the importance of prosperity and self-reliance. And so are the hypocrite politicians who rely on the old wicked trick of muscle and money to succeed but keep talking about bringing about new changes to the country. We already have had our fancy rides (in our imaginations, of course) on the bullet trains they have been promising to bring to our doorsteps! What more can this spectacle throw at us?

That’s why I’m repeating that we can’t really say that the political parties and their leaders haven’t done anything. Because everyone who cannot do anything at least tweets these days! They think the ‘new revolution’, too, would be made possible through Twitter. And perhaps the Nepali politicians want to believe that the unemployment problem in Nepal has been taken care of as every Nepali is occupied with his own business on Facebook!

On the other hand, the media too gets fodder for their news coverage when they see the tweets or ‘bytes’ of some politician. The kind of coverage the Nepali media has been giving to the politicians these days reminds us of the Indian State of West Bengal in the 1980s when the media there would fill their pages with the gossip of politicians and the photos of their huge rallies. But history is testimony to what happened to West Bengal for the next 30 years! Perhaps it’s now our turn to repeat the same history.

No significant foreign investment has come to the country though some lucky Nepalis have been flying abroad and lining their pockets in the name of organising and attending investment summits. The country would’ve perhaps advanced more if we had rather taken care of our domestic industries. But dealers claiming to be leaders have risen up the political ladder. Who then, should lead then?

They say the developed world has already developed a driverless car. They say planes without pilots in the cockpits have started flying in those countries. Here in our country we don’t really know who holds the steering wheel and who presses the brakes! In this way, if our politics, our government, and our development efforts keep moving at the same pace and in the same style, then we are surely going to have a driverless government soon. After all, the era of AI or artificial intelligence has already begun. So, above anything else right now, surely the best thing for us to do at the moment is to find ways to keep ourselves safe and secure?