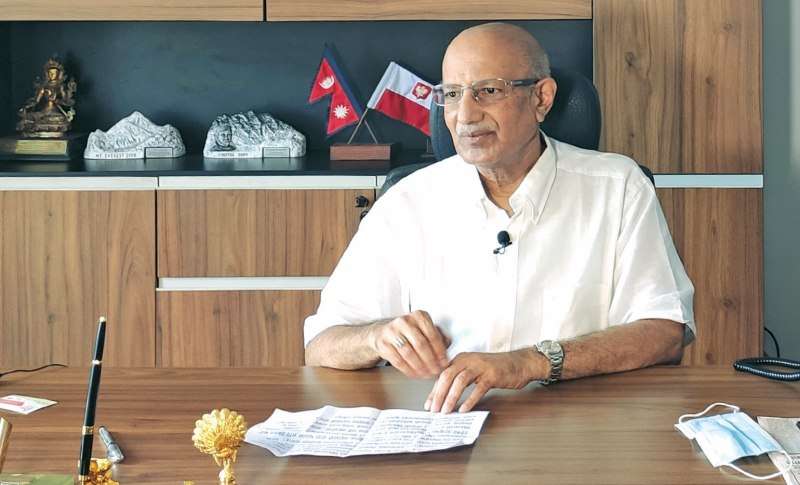 After the revolution of 1951 that overthrew the Rana regime, Nepal began to extend the hands of friendship to many countries. Most importantly, the Himalayan nation started opening up to the rest of the world. Poland was among the countries Nepal established bilateral relationships with in its first decade of democracy. The two countries declared formal diplomatic ties on 25 November, 1959. It is important to mention that Nepal and Poland decided to prioritise economic ties, among other things and in 1966, Poland opened its trade representative office in Kathmandu which was replaced by the residential Polish embassy in 1974. At present, the Polish ambassador to India is accredited to Nepal, whereas Nepal’s ambassador to Germany is accredited to Poland.

Over the years, the two countries have explored various areas of mutual interest. Nepal and Poland signed a Trade and Payments Agreement in 1966 and have engaged in student exchanges. Similarly, Nepali students are also studying in colleges and universities under an established Polish scholarship programme. Meanwhile, Poland is also an emerging destination for Nepali migrant workers. According to the Nepal Labour Migration Report 2020 published by the Ministry of Labour, Employment and Social Security, Poland received one percent of Nepal’s migrant workers in the fiscal year 2017/18. Official statistics published by the Polish government also showed that authorities there issued 20,000 work permits to Nepalis in 2018 making Nepal the second biggest source country of labourers to Poland after Ukraine that year.

The Nepali private sector has also been active over the years in boosting Nepal-Poland economic cooperation. According to Lokmanya Golchha, honorary consul general of Poland to Nepal, Nepali businesspersons are working and interacting with Polish investors to explore possible areas of mutual interest in commerce and industry. “Nepal's effective diplomacy is essential to advancing the country's interests in Poland and to attract investment from the European nation,” he says.

The veteran industrialist recalled the early days of trade between Nepal and Poland which started in the mid-1960s under a barter-like system. “Nepal used to export raw jute to Poland and in exchange imported corrugated sheets, textiles and electrical items,” he shares. Golchha, who is the Chairman of the Golchha Organization, thinks the six decades long relationship between the two countries serves as an avenue for exploring opportunities for attracting foreign direct investments (FDIs) in various sectors such as hydropower, agriculture, tourism, banking along with manufacturing and trade.

Poland is known for its expertise in engineering, manufacturing of machinery and agriculture, small aircraft alongside its mines and minerals industries. “Poland is also a manufacturer of arms and ammunition and has a notable defence industry which could be another area for cooperation,” mentions Golchha. Golchha suggests that it is in the best interests of Nepal to strengthen bilateral ties with the central European nation for the transfer of technology and to explore opportunities in industrial and agricultural ventures.

According to Golchha, Nepal has the potential to export items such as tea, chhurpi (Himalayan hard cheese), yak cheese, handicraft items, readymade garments and pashmina to Poland. However, Nepal has not been able to reap the benefits, because, according to government statistics, Nepal exported just USD 161,987 worth of goods to Poland in 2019, whereas its imports from the EU country totaled USD 15,412,727. Nepal mainly exports RMGs, handicraft items and art works and imports machinery, dairy products, and beverages from Poland. “We need to narrow this wider trade deficit with the EU country and seriously focus on increasing exports,” stresses Golchha.

Nepal has remained a favoured destination for Polish travellers. Similarly, mountaineering teams from Poland have been visiting the Himalayan nation to climb the majestic peaks for many years. In 2019, 88 polish climbers attempted to climb different mountains including Mt Everest. “Both countries have good experience in the tourism sector. So, cooperation in tourism carries a very high potential,” opines Golchha. "I believe a lack of resource planning is an obstacle to increasing trade and enhancing economic ties which can be addressed by the active participation of multilateral associations and other private sector institutions," he also says.

Thus, Nepal and Poland still have a long way to go to realise this untapped potential in economic cooperation. Both countries are yet to sign bilateral economic/investment agreements to ease the hurdles in investment. Similarly, they are yet to agree on a labour pact which has been considered important to streamline the work and residence permits of the growing number of Nepali migrant workers in Poland.

Golchha, who has a deep understanding of Nepal’s economy and international commerce, is seen as an important member of Nepal’s economic diplomatic fraternity. On August 2, he became the new Dean of the Honorary Consulate Corps of Nepal (HCC-N), an association of honorary consul generals representing different countries in Nepal, after the tenure of Basanta Kumar Chaudhary was over. Golchha says that he will focus his efforts on further strengthening HCC-N as an institution vital to Nepal’s economic diplomacy. “The enhancement of economic diplomacy has become more important than ever for any country to safeguard its national interests. HCC-N will actively support the government in its economic diplomacy efforts and also in tackling agendas of emerging global concerns such as climate change and gender equality,” he says.

According to Golchha, the activities of HCC-N have become quite effective in recent years. The HCC-N– FICAC Regional Conference 2019 was held in Kathmandu jointly by HCC-N and the World Federation of Consuls with the theme of ‘Solidarity for Shared Prosperity’ during the tenure of former Dean Pradeep Kumar Shrestha. "We have felt that these kinds of events can play a big role in enhancing economic diplomacy as well as promoting Nepal as an investment and tourism destination,” he says.

Golchha views that honorary consuls can serve as an integral part of Nepal’s international outreach initiatives helping the government to bolster bilateral cooperation and economic ties with other countries. “But it is the trade and investment policies of the country that play a vital role in economic diplomacy efforts,” he says, adding, “Despite repeated commitments over the years, the Nepal government is yet to chart out a meaningful path for engagement with other countries to reap the benefits of economic cooperation,” he adds.

Golchha mentions that the government is well aware of the importance of honorary consuls and is willing to support them. He says that government officials and honorary consuls had a good level of cooperation during the past one and half years of the Covid-19 crisis to help foreigners who were stranded here during the lockdowns to get back to their countries. “I would like to extend special thanks to the Ministry of Foreign Affairs, Ministry of Home Affairs, Nepal Tourism Board, Tourist Police and Nepal Army for their full support in this regard,” he concludes.