This software development firm has registered noticeable success through innovation and persistence.

It is said that the gaps existing in the market could be niches for new businesses. This is clearer and more evident in the IT sector where big companies that can't focus on all areas at once need support companies that can take care of important technical tasks. A software consulting startup LogicaBeans is one such company which works for the Nepali fintech major f1Soft International.

In 2017, when f1Soft was working for a US-based healthcare project, Kailash Shrestha and his two other colleagues, who were employees of f1Soft at the time, came up with the idea to establish their own company. The project, which was carried out by a startup company, faltered for three years due to the lack of a mobile application. When f1Soft got involved in the project, the development of the mobile application was completed in just six months. Shrestha and his colleagues realised that the market was in dire need of a partnering company which could fill such technical voids and they established LogicaBeans in August 2017. At present, Shrestha is the CEO of the company, while the other two founding members are not directly associated with the company. 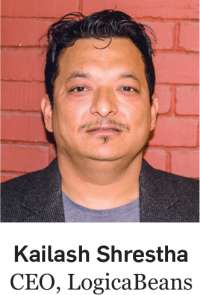 Starting his career in 2007 as Senior Software Development Engineer at f1Soft, Shrestha has a long-term association with the fintech firm. In September 2012, he became the Chief Product Officer to look after products and services like eSewa, Viber banking, mobile banking and internet banking. Besides leading LogicaBeans as CEO, Shrestha currently also serves as Technical Consultant of eSewa Fonepay and Chief Strategy Officer of f1Soft International.

In the IT sector, many companies struggle between having software ideas and lack of direction to execute the ideas. LogicaBeans bridges the idea-execution gap in the field of software development. “Our core focus is on executing project ideas into a final product and this way we act as a bridge between ideas and outcomes. Any company, be it big enterprises or startups, that has ideas about the kind of product to develop but lacks a team of skilled developers can reach out to LogicaBeans,” says Shrestha.

LogicaBeans call itself ‘a startup for startups’. According to Shrestha, the company helps startups that are in need of IT related support in areas including software development, mobile application, web application, front and back end development, data migration, artificial intelligence and technologies like blockchain. While basically catering to startups, LogicaBeans also provides different types of enterprise solutions to large companies.

“LogicaBeans works with startups that have not been able to grow due to IT related issues such as difficulties in setting up of developer teams and problems to convert projects into products. We guide the companies in the technological side to make things happen with minimum funding,” mentions Shrestha. Meanwhile, LogicaBeans also provides funding to startups to scale up their growth taking stake in the companies. Shrestha informs that LogicaBeans has catered to five startups till date.

Unlike many startups, LogicaBeans was fortunate enough in terms of managing its financial resources as F1Soft invested the initial capital of Rs 10 million to establish the company.

However, there were challenges to set up a skilled team in the beginning. "f1Soft and the recruiting agency helped us to hire a team of highly- skilled IT professionals who were successful in easily winning the trust of clients in a quick span of time," says Shrestha.

Among the many areas LogicaBeans works in, health tech and fintech have been the company’s primary focuses so far.  It has developed medical insurance eligibility verification software for a US client. “It is a data extraction platform, which extracts data from the insurance company, provides it to the hospital and ensures the patient's eligibility to get the insurance coverage for health treatment and medication,” shares Shrestha. Likewise, the company has developed a savings system called Mero Bachat for f1Soft which is delivered through mobile banking apps. Under this system, transactions have been designed in a way where spare cash, like one or two rupees, is deducted from a roundup transaction and transferred to the savings of users.

LogicaBeans has been providing its services to international clients from countries including Australia, US, UAE, Finland and Germany.  The company reaches its clients using PR tools, seminars, webinar, and startup campaigns like ‘500 startups’.  "Many people believe that to establish an IT company, they need to have in-depth knowledge of IT which is not true. This perspective has been a barrier for us to reach customers in the domestic market,” says Shrestha, adding, “Anyone with ideas and a vision to cater to the demand in the market is qualified enough to enter this industry.”

Shrestha, who has been working closely with startups in Nepal and abroad, says Nepali startups lack direction to move forward. According to him, those who basically develop ideas during their college years fail to realise their ambitions due to a lack of knowledge in getting funding, technical support and an effective management team. He observes that the ongoing Covid-19 pandemic has adversely impacted the once burgeoning startup scene. “Many startups have closed, and people are focused towards settling down rather than starting a new venture,” he says.

Unlike many other companies that were forced to bear the brunt of the global health emergency, LogicaBeans has remained relatively unaffected from the crisis. “Startup ventures have been pushed to downsize themselves as a result of the economic hardships created by the pandemic. We were lucky that we avoided axing the number of employees or facing big financial losses,” says Shrestha .

On the other hand, the pandemic has provided a big boost to the growth of digital financial services in Nepal. He thinks that the pandemic has acted as a catalyst in terms of the adoption of digital transactions by the general public which has presented lucrative opportunities for companies like LogicaBeans. “This change needs to be sustained. A huge portion of the population still lacks digital access. So, there is a great opportunity for us." He adds that the health sector is also slowly embracing technological innovations which has expanded the business horizons for his company.