Based on the of the ever-popular R15, Yamaha’s latest offering is a robust urban traversal machine.

Earlier this year, Yamaha launched the third iteration of the much-vaunted R15. It’s a bike that has long captured the imagination of the millennial crowd in Nepal, what with its full fairings and a stylish, sporty aesthetic.

Now, Yamaha has recently launched the MT-15, a distant relative to the R-15. The MT-15 is built on the foundations of the R15 – they both share the same engine and chassis. That’s where the similarities end, however. The MT-15 eschews the low rider stance and fairings of the R-15 in favour of a more utilitarian approach. It’s certainly a looker, to say the least. I spent four days with Yamaha’s latest naked bike. Below are my thoughts and impressions. The MT-15 is made for the streets. The bike has a much more rugged and muscular look and feel to it. The finely sculpted tank does wonders for the bike’s visual appeal – it presents an image of strength and confidence. It’s clear that Yamaha’s target demographic are the urban millennials. The bike has a stylish, muscular aesthetic that should appeal to that particular consumer segment.

Looks are entirely subjective, but irrespective of where your aesthetic tastes lie, it’s hard to deny that the MT-15 has a formidable presence. Nowhere is that facet of the bike more apparent than in the front. The split dual headlamps look less like a traditional bike headlight and more like Bumblebee from Transformers. Again, this is all subjective, but the futuristic look of the lights instantly won me over.
The MT-15’s rear takes on a much more traditional look, complementing the front end. As a package, the MT-15 is a modern, stylish and eye-catching motorcycle. It comes in two colours – Metallic Black and Dark Matt Blue. 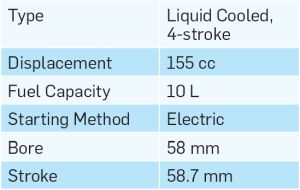 The engine on the MT-15 is identical to that of the R15 V3.0 that made its bow in Nepal earlier this year. And much like the R15, the liquid-cooled, SOHC, 4-valve engine can produce up to 14.2 kW of max power @10,000 RPM and 15 Newton metres of torque @8,500 RPM. In terms of real-world usage, that is plenty of power for a bike that is primarily meant to be utilised as an urban commuter.

The acceleration is undoubtedly brisk, even with a pillion rider in tow. Gear shifts are engaging and responsive. In terms of day-to-day performance, the MT-15 is a champ. And this aspect is more important to users than any technical jargon regarding its RPM or torque. When it comes to overtaking, the MT-15 is a champ owing to its crisp acceleration and agile handling.

Briefly going back to the R15, while I was impressed with the bike, on the whole, the low rider stance was something I didn’t fully come to grips with. Fortunately, the MT-15 has a more traditionally upright stance while still retaining the powerful and peppy engine of the R15.

In terms of comfort, the rider seat is reasonably plush and easy to get used to. However, this is ideally a one-person bike – the pillion seat is rather small and at an uncomfortable height. This shouldn’t be a problem on shorts bursts, but over long distances, it could get uncomfortable.

Aside from that niggle, the ride quality on the MT-15 is impeccable. The bike handles like a dream, and this makes the entire experience that much more rewarding. Whether I was cruising on the highway or slaloming my way through narrow streets, the MT-15 was an able companion. There is a genuine and worrying dearth of moderately priced ABS-enabled bikes in the country, exacerbated by the fact that bikes remain the vehicle of choice for many. The inclusion of ABS is a welcome sight and dramatically enhances the safety of the bike. The brakes themselves offer tremendous bite and excellent response times, a must for safely navigating the roads of Kathmandu.

Final Impressions
The Yamaha MT-15 is an attractive proposition. In terms of looks, it offers something entirely out of the ordinary, with its futuristic headlamps and a muscular build and design. The bike is no slouch when it comes to performance either – with great acceleration and, a firm stance and agile handling, it’s a dream to ride. The inclusion of single-channel ABS is yet another positive. Taking everything into account, the MT-15 is certainly worthy of consideration for anyone looking at the 150-cc naked segment.