From satellite TV services to the internet, this pioneering company in digital TV services is moving in a new direction of growth and innovation.

At a time when Nepali internet service providers (ISPs) are going into digital TV services, the country’s leading Direct-to-Home (DTH) and Fiber-to-the-Home (FTTH) service provider Dish Media Network Ltd, the company which owns DishHome and SIM TV, has been expanding into internet services as well. The company has plans to invest Rs 3 billion to Rs 3.5 billion in infrastructure and other related aspects in the next 2 to 3 years. “Our large customer base in DTH has presented us with a big opportunity to provide new services,” says Sudeep Acharya, managing director of Dish Media. According to him, there are over 1.5 million subscribers of DishHome at present. The company plans to distribute internet services through fiber cables of SIM TV, a FTTH service provider acquired by Dish Media in 2017.

Besides, the company also plans to provide broadband internet services as well. According to Acharya, internet services in rural areas will be made available via satellite, whereas subscribers in urban and semi-urban areas can access Dish Media’s internet service through SIM TV fiber cables. “We are working on a small scale in the first phase to commence internet services within January 2020 in Kathmandu. Then the service will be gradually extended across the country,” he says. The company has already joined hands with the Israeli company Space Communication for satellite internet. To reach out to prospective customers for internet services, Dish Media has been identifying locations with high number of subscribers across the country. At the same time, the company is also looking to start its V-Sat project targeting the rural market.

The Beginning
A pioneer in DTH services in Nepal, Dish Media began its journey a decade ago when the government had not even announced the digital switchover (DSO) to digitalise the Nepali television market which was largely dominated by analogue TV broadcasts. Its flagship brand DishHome is the result of a merger between two DTH service providers- Dish Nepal and Home TV. “We started in 2010. It was in January 2011 when the merger between Dish Nepal and Home TV to form DishHome brought the much-needed synergy in the Nepali digital satellite TV services business. The merger was important because both companies realized that it will be very difficult for them to survive due to the high cost associated with the running of satellite TV services and the size of investment they needed. This type of project requires big financing and it was something we had not thought about initially,” recalls Acharya, adding, “Since we are in the service industry, it was not like selling hot cakes and making money.”

Turning Points
Even after the merger, the company went through many ups and down in its first five years. The merger provided a relief for the company to some extent, but it again had to struggle with financial hurdles. A major turning point for Dish Media came in 2012 when Sandmartin International Holdings Limited, a leading satellite TV company based in Hong Kong and Taiwan, became a major stakeholder in the company. Sandmartin not only brought the investment Dish Media needed but also provided it with technological expertise in digital satellite TV broadcasting.

Similarly, another turning point for the company was in 2015 when DishHome’s TV signals were obstructed due to the devastations caused by the earthquake. This situation forced the company to migrate its satellite. Before 2015, DishHome’s subscribers were required to point their dishes to one satellite. After the migration they needed to point towards another satellite. For this, the company’s technicians had to visit the homes of their subscribers which was time-consuming and costly.

A Focus on Innovation
For Dish Media, embracing innovation in digital satellite TV broadcasting has been the most important factor to survive in the business since its inception. From launching mobile apps to enabling subscribers to check the balance and availability of credit, SMS credit facility, top-up balance via bank cards to introducing entirely new things in broadcasting in Nepal, the company has been constantly innovating its services over the years to provide a unique and pleasurable TV viewing experience to its subscribers. One such innovation is the broadcasting of The FIFA World Cup 2018 with Nepali commentary. “It was a historic moment when we aired the whole FIFA World Cup 2018 from the Action Sport channel with Nepali commentary. It was for the very first time in the country that a global sporting event was broadcast in such a way,” notes Acharya. Similarly, Dish Media is the first TV service provider in Nepal to start dubbing popular Hindi serials in the Nepali language. “For lots of Nepali speakers, this is entirely a new thing which nobody has done before,” claims Acharya.

The monumental rise of mobile technology over the last decade has opened new doors in entertainment and information. Keeping pace with this development, Dish Media has introduced the DishHome Go application. Also known as Over-The-Top (OTT), this innovative technology enables subscribers to watch TV programmes on their mobile phones. The users of the DishHome Go app, which is available at Google Play Store and Apple Store for free, can watch 20 different TV channels. “As part of our innovation drive, our focus is also in the modification of the set-top box. We will also be providing contents through IP to allow our subscribers to enjoy movies from their current set-top boxes in the coming days. It will be like subscribing to Netflix,” informs Acharya, adding, “Subscribers who buy certain type of set-top boxes can avail this service.”

The company is also planning to provide its broadcasting services through different type of setup boxes including smart boxes. According to Acharya, even if people don’t have smart TV sets, they can use smart set-top boxes. Such devices let viewers to use smart features in their normal televisions. Additionally, Dish Media also plans to launch the H.265 set-top box in the near future; this type of set-top box is used for enhanced picture quality. Moreover, a separate entity called Digital Home International (DHI), which has investments from Dish Media promoters and other investors, has also started manufacturing set-top boxes in Nepal. The new company has a production capacity of 10,000 set-top boxes per day.

Adding Premiumness to Programmes and Packages
Dish Media has been broadcasting a large number of national and international TV channels in both high definition (HD) and standard definition (SD) standard packages. Currently, the company’s subscribers can watch over 180 TV channels -more than 130 SD and over 50 HD channels.

Ramailo TV, which was started three years back, has won the hearts of many Nepalis with its quality contents such as dramas acted by popular celebrities like Nir Shah, television series and reality shows. Likewise, the music channels- Cine Hits and Gunjan – are becoming popular among music lovers by airing hit songs of movies and folksongs, respectively.

In the meantime, DishHome’s Plus Movie is the only 24 hours movie channel in Nepal. According to Acharya, the number of TV channels owned by DishHome will be increased to 15 from this January. In a bid to diversify the TV content, the company is also working to air Korean movies and Pakistani channels.

The company is also moving ahead withPay-Per-View (PPV) services. In digital TV transmission, PPV is a service which allows viewers to purchase particular telecasts.

PPV of DishHome enables subscribers to watch new movies from their homes at the same time when the movies are released in cinemas. “Recently, we telecasted the Nepali movie ‘Cha Maya Chapakkai’ through PPV. Our subscribers can pay and watch new movies once a week,” says Acharya. According to him, the company has plans to expand the PPV service.

Market Presence
Dish Media currently commands over 30 percent of the digital TV market in Nepal with a countrywide presence.  It has around 90 distributors, 15,000 recharge points, a network of 2,500 sub-dealers and a customer base of over 1.5 million.

“We invest, upgrade, listen to our customers and continue to provide more unique services.” 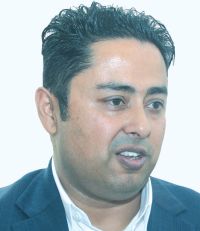 What accomplishments of Dish Media would you like to highlight in its role as a DTH service provider?
Our focus has been on innovation to provide unique viewing experiences to Nepalis. Not only being the first DTH services provider in Nepal, we are the first in the country to introduce HD TV channels; there were no HD channels before 2014. So, these and our many other initiations changed the whole landscape of TV viewing in Nepal. We started digital TV services in Nepal when the government had not even adopted the policy of television digitalisation. Now the TV market has become more competitive as everyone in the market is required to come to the digital platform.

How is the competition for Dish Home? What is it doing to stay ahead?
In today’s fast evolving world, it is important for businesses to become dynamic as the behaviour of customers is also changing. So, Dish Media tries to catch up with the latest trends in the market. Customers are at the centre of our activities as their satisfaction is the most important factor for us to move ahead.We invest, upgrade and listen to our customers and continue to provide more and unique services to stay ahead in the competition.

What arrangement have you managed for easy payment of your service to the customers?
We have adopted all types of payment systems that our subscribers can use according to their convenience. We have recharge cards that are sold through our distribution network. Then we have tied up with digital wallets such as IME Pay, eSewa and Prabhu Pay and also with some of the banks like Global IME and Nepal Investment Bank Limited to provide e-payment facilities to our subscribers. We also have a payment system where distribution network can pay through our contract basis i.e. customers can make direct payments with our dealers or distributors.

How many people are getting employment at Dish Home currently?
180 people are directly employed in our company. Among them, around 80 are technical and the rest are non-technical staff. We have more than 200 people including those who have been employed on a contract basis. There are over 200 people working in our customer service section’s call centre alone. We have some people who have been with the company from the beginning. Similarly, a large number of people are associated with Dish Media Network through its 800 service franchises.

What challenges is your company facing at present? How are you coping with them?
The government’s announcement to implement the Clean Feed policy has created problems for us. The policy is still unclear due to which it will be difficult for the entire TV operators industry in Nepal. So, we are planning to provide new content from our side. If the government keeps on insisting on Clean Feed, we don’t know how it will turn out because TV operators in Nepal are dependent on foreign content providers like Sony, Zee and Star. If they cannot distribute their content here, it will create a big problem not only for us but also for consumers as well because they are so acquainted to watching such contents.

In such a situation, subscription rates will go up which will be difficult for us to justify as we don’t know how subscribers are going react regarding the pricing matter. The changing TV viewing habits of consumers also pose a challenge for us; use of mobile devices for entertainment and information is increasing at present. We already have taken steps to tackle this particular problem by introducing a mobile app. Besides, getting sufficient sports TV content is also another challenge at the moment.