Now part of a global alliance of banks, NMB is moving forward putting ethical banking practices at its core. 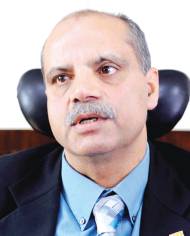 Being the only member from Nepal in the Global Alliance for Banking on Values (GABV), NMB Bank, a joint venture of the Dutch development bank FMO, is hosting the 9th GABV 2017 conference in Nepal on March 7 to 9. GABV is an independent worldwide network of banks whose objective is to use finance to deliver sustainable economic, social and environmental development. CEOs and senior executives from more than 40 banks and other financial institutions across the world will be attending the three-day event. “We are organising the conference not for our own purposes, but for the whole financial system,” says Upendra Poudyal, CEO of NMB Bank. “We will be promoting value based banking through the conference. We are trying to communicate the same philosophy in Nepal,” he adds. The bank is hosting the 9th GABV 2017 conference as a part of its CSR activities engaging with all stakeholders.

NMB Membership with GABV
The global financial crisis of 2008/09 forced the global banking industry to move ahead with a different approach incorporating ethical business practices. The GABV was formed in this background and has been stressing value-based banking ever since its inception in 2009. GABV aims to change the banking system in terms of transparency, social and environmental sustainability supporting the economies. The alliance is composed of a diverse range of banking institutions serving the real economy.

NMB Bank has been a GABV member since 2013. With the membership the bank has adopted value-based banking to its core. The bank has increased its exposure to the real sectors and has put systems in place to reduce exposures on speculative and non-real sectors assets. Similarly, the bank has increased its financing in areas including hydropower, renewable energy, small and medium enterprises (SMEs) and micro-SMEs. The bank believes that the incremental exposures in the real sector will support the communities and strengthen value chains which will ultimately contribute to the country’s economy providing sustainable returns.

GABV members share their experiences and learn from each other. NMB Bank has been sharing its experiences with other GABV members at project, client and transactional levels. The members of GABV share their best practices with each other and try to localise ideas by working with local communities as possible.

GABV in Nepali Financial Market
NMB Bank hopes to bring the world of value-based banking to Nepal through GABV. Nepali BFIs will get opportunities to understand value-based banking perspectives from banking leaders from around the world. GABV member banks will discuss various topics including the importance of people over profit, impact of banking on real economy, banking in communities, transparency and resiliency against minor disruptions, among others. NMB Bank views that these banking perspectives will help Nepal bring changes to the way banking activities are conducted today, which will ultimately promote the real economy achieving long-term sustainability.

Post Merger Scenario
Established in 1995 as Nepal Merchant Banking and Finance Company, NMB bank became an ‘A’ class commercial bank in 2008. The bank in October 2015 merged with Clean Energy Development Bank, Bhrikutee Development Bank, Pathibhara Bikas Bank and Prudential Finance Company. After the merger, the bank had Rs 6.2 billion in paid-up capital which has now reached Rs 6.46 billion. “The remaining amount will be fulfilled from our cash reserve to meet the target set by Nepal Rastra Bank (NRB) to increase the paid-up capital to Rs eight billion,” mentions CEO Poudyal.

It was somewhat difficult for the bank to achieve immediate growth after the merger as different institutions were operating under different systems. Nevertheless, the bank has been able to create an efficient system over time. “We have developed a certain level of synergy,” opines Poudyal, adding, “The resources have become better after the merger. The portfolio structure has also improved as we have diversified the portfolio on a regional and sectoral basis.” Similarly, the expansion in points of representation (branches) is also benefiting the bank overall. “The difference can be felt on the branding of the bank,” he says.

Focusing on Trained Staff
Prior to the merger, the bank’s approach to develop rapport at all levels from board, promoters to employees helped it build a strong foundation. The bank after the merger has been trying not to transfer the employees as much possible and has stationed them as per their convenience. Poudyal informs that the bank gradually trained its employees providing opportunity for skill enhancement. “We provided training by creating a separate department for learning and skill development,” he mentions. The bank also provided e-learning classes. “Due to this, either in operational or human resource integration, we have been able to track and resolve the problems very well.” views Poudyal.

Similarly, NMB has also been focusing on enhancing communication at all levels.  “Whether at the time prior or after the merger, communication plays an important role for the smooth functioning of an organisation,” shares Poudyal. When asked about the cultural integration, he says that everyone in the institution is clear about the cultural values and norms of the bank.

Meanwhile, NMB Bank has been providing training on secured cash flow to its new members who came from the regional level development banks that have merged with the bank.

Prioritising Operational Integration
The bank has focused on operational integration as the first priority after the merger.  “We have put our efforts on operational integration so as to minimise the impact on our customer services,” shares Poudyal. Similarly, human resource integration, training development and business growth have been other areas of focus for the bank. The bank also has been concentrating on network expansion as well. Likewise, institutional infrastructural development is another area of priority for NMB Bank. “We are also working on the branding of the bank as well,” he says.

Supporting SMEs
The bank is giving importance to small and medium enterprises (SMEs) as per the new NRB directive on direct lending on micro-credit. For this, the bank has focused on diversification of retail deposits.  It is the reason why the bank has been focusing on retail deposits and SMEs as the branch expansion drive is going well.

“We believe in gradual and sustainable growth. We should move ahead by keeping the bank structurally in a right place not compromising good banking practices,” says Poudyal. “It will help the diversification of risks and the gradual growth of the institution.”

Despite the growing BFI industry, only 40 percent Nepalis have access to finance. As a responsible financial institution, NMB Bank attempts to contribute to improve this through its micro-financing services.  Poudyal says, “Not only from the bank, but through our subsidy companies we plan to contribute to the increment in access to finance of the general people.” The bank’s 50 branches are working for micro-finance services. The strategy will also increase the market penetration of NMB Bank.  “By liberating the strengths of our subsidiaries, we are planning to widen our penetration of the market,” he says. “We are a very strong bank in terms of corporate banking and investments in the hydropower sector. Strength, sustainability, and stability are the main areas that the bank has been working for,” he adds.

In a bid to achieve sustainable growth and maintaining good business practices, NMB bank has partnered with the Dutch bank Nederlandse Financierings-Maatschappij voor Ontwikkelingslanden (FMO). The bank in September 2016 signed a joint venture agreement with the FMO. FMO holds 20 percent of the bank’s shares and is the largest shareholder of the bank. With the agreement, NMB Bank aims to become the market leader by managing environmental and social risks as a major player in sectors such as renewable energy and agribusiness.

Products and Schemes
NMB Bank has been offering a number of products and services in bank accounts and deposits, loans, priority banking, remittance and cards to its customers. It also has life and non-life insurance products. The bank for the purpose has tie-up with 13 different insurance companies for the purpose.

With the introduction of ‘Ek Ghar Ek Khata’, the bank has introduced a 12 percent deposit scheme to its customers. The bank plans to bring out the different schemes in a timely manner.

CSR
NMB bank has also been giving equal importance to CSR activities from the beginning. The bank has an independent organisation, NMB Social Initiative formed by the bank’s employees and its subsidiary, to carry out activities in social development. The bank especially focuses on the conservation of heritage sites across the country and has been continuing the initiative for the last five years. The bank contributes Rs 10 to its NMB Social Initiative's account for heritage conservation whenever a new account under the Alakapuri Savings scheme is opened. The NMB Heritage Walk is a notable mention in this regard which the bank in has been organising in association with Kathmandu Metropolitan City Office every year to raise awareness on the conservation of historic sites.

Apart from these activities, the bank has been active in supporting victims of natural disasters and also organising health camps in various parts of the nation.  Besides these, the bank conducts various CSR activities on different occasions as well.