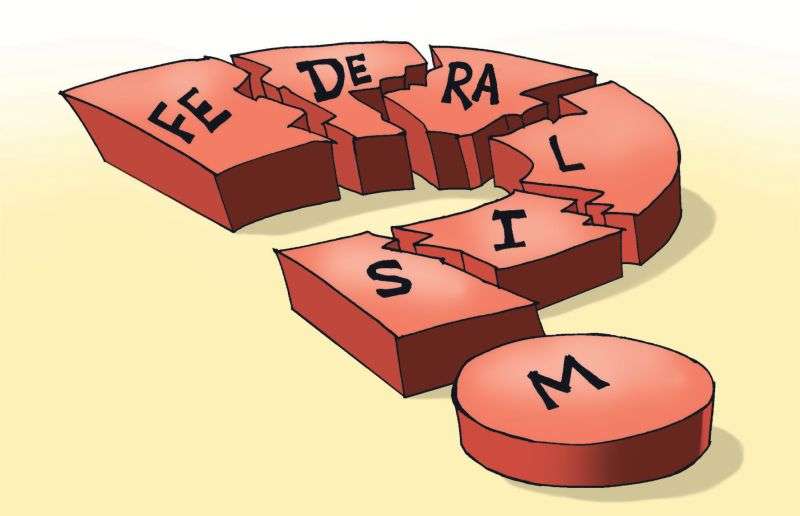 Federalism may be a great idea. Too bad it doesn’t seem to work in Nepal!

A decade after the country formally embarked on the path of federalism, 15 months after the constitution officially recognized the federal model, a year after the economic blockade that left deep scars in Nepal’s collective psyche and nearly ravaged our economy, federal disputes remain. In this period, the country has seen seven prime ministers, each with an avowed goal of settling federal affairs. None of them succeeded.

After the government registered the second constitution amendment bill in parliament on November 29, last year, proposing to alter the boundary of Province 5 by removing  moving all its hill districts and merging them into Province 4, protests have flared up in the country. Leaders and people from this region have vowed to foil this plan, come hell or high water.

Protests for and against federalism have become a routine occurrence. Every time political actors have tried (or resisted) settling federal disputes, the country has stood still—think of the over one month of protests for an ‘undivided’ Far-West in 2012, over five months’ violent protests in Madhesh last year, ongoing strikes in mid-western towns and disruptions in parliamentary proceedings.

In a bid to douse the federal flames raging in mid-western towns, the major parties might come up with a proposal to form a powerful Federal Commission. But that won’t solve the problem. If and when this commission makes a recommendation, it is sure to be strongly contested, just like the recommendation of the State Restructuring Commission of the first Constituent Assembly.

Even if we leave it to federal parliament to decide, given the electoral system we have adopted, no single party is going to emerge victorious with a clear majority, which means repetition of the same story.

All this indicates that federalism that used to be described as one of the ‘great’ achievements of Nepal’s peace and constitution process is on the verge of failing even before its implementation. What led to this situation? Is there an alternative? This article will dwell on these questions.

The Maoists raised the federalism agenda sometime in 2003. But there are conflicting interpretations as to why they carried this agenda. It is widely believed that the rebel leaders embraced this idea in the latter phase of the revolution since they were miserably failing to garner support from ethnic and Madheshi population. No wonder when they joined mainstream politics and agreed on Interim Constitution, federalism was left behind.

Perhaps fearing that the Maoists would sweep the elections with federalism agenda, CPN-UML adopted federalism in 2006. The Nepali Congress followed suit through its 11th General Convention when it adopted the political line of ‘state restructuring and inclusive democracy’ in September 2007. Federalism gained wider currency after the debate entered the first Constituent Assembly.

But a time came when federalism became a subject of bawdy jokes in television serials and public conversation. Various communities from the high hills, Chure range and Madhesh started to demand separate states. And the government of the day started signing agreements promising that their concerns would be addressed during federal restructuring. These agreements contradicted each other. By the time the first CA was on its death bed, the concept had become so used and abused, it started to appear more as a source of problem than a solution.

So much so that the forces that claimed to champion federal aspirations themselves got badly defeated in the second CA elections. Instead, the forces which had accepted federalism only in principle but which had always opposed the kind of federal model that Maoists and Madheshis were demanding, prevailed.

So what went wrong?
Basically there are two reasons. First, federalism was not the agenda of Nepali Congress, nor UML’s. They had accepted it unwillingly. The second reason is the increased geopolitical interests in Nepal’s federal issue. India, it seems, wanted to use Madhesh as a card to influence politics in Kathmandu. This could be easier, India thought, with provinces in the plains carved according to its interests.

Also, there are those who believe the way the federalism debate was raised in Nepal was fundamentally flawed.

Federalism was described with extreme form of exaggeration and with emotionally charged rhetoric. Supporters presented it as a cure-all option instead of presenting it as a means of effective administrative decentralization. Supporters accused detractors of being the followers of Panchayat. The detractors went to the extent of calling the supporters secessionists. Ultimately, it boiled down to the narrow concept of protecting one’s electoral constituency. To make matters worse, public intellectuals also failed to make people understand what federalism really is.

By design or default, the demand for Madhesh-only province came to be associated with a ‘design’ of secession. Even responsible Madheshi leaders started to issue veiled threat of secession if their demand for Madhesh province stretching from Mahakali to Mechi was not met. When Sarat Singh Bhandari, who was a defense minister at the time, warned in September 2011 that 22 districts of Tarai plains could decide to sever ties with Nepal if the state continued discriminating against Madheshis, it raised an alarm among hill communities: So is this what they want federalism for!

India’s interest in federal demarcation became an open secret during the economic blockade.

A huge section of the CPN-UML and other leftist parties strongly believe federalism is a part of a greater Indian design to disintegrate Nepal and to ultimately merge Tarai plains into Indian union. They refer to a book by RK Yadav, former officer of India’s Research and Analysis Wing (RAW), Mission R&AW, where he mentions Rameshwar Nath Kao, the first RAW chief, as telling him how he (Kao) planned to disintegrate Tarai area of Nepal and how the plan was deferred “in view of political turmoil in India when Indira Gandhi declared emergency” in June 1975. After Indira Gandhi lost 1977 elections, says Yadav, “Kao’s operation of merging Tarai” with India “did not materialize.”

But celebrated professor of sociology Chaitanya Mishra in his interview with a broadsheet newspaper last week went at great length on how India is using the Madhesh card to fuel disunity between hill and plains by trying to establish Madhesh as a “separate nationality”.

Madhesh analyst Tula Narayan Shah, however, does not buy this argument. He argues that the secession threat is “more a matter of speculation.” “There is no yardstick to measure whether secessionist sentiments exist or if they are real,” he said. “Mainstream forces of Madhesh do not represent this sentiment.”

Be that as it may, the fear of secession seems real to larger hill communities. If Madheshi forces, together with India, had not blockaded the country last year, or if they had even expressed slight compunction for blockade and assured that this would not happen again, perhaps the federal wrangling would not have come this far.

Perception among hill population is that conceding Tarai districts to Madhesh provinces could prove to be the beginning point of losing these districts to India. You can sense this in the undertone of protests against provision of Madhesh-only districts in Province 5: What if some elements will use this as a precedent to break remaining Madhesh districts from hills as well?

Like it or not, Indian aggression of last year, together with border blockade that Madheshi forces claim to be their own but all evidence shows to be India’s doing, have not only instilled anti-India sentiments in Nepal and complicated the federalism agenda but also pushed its implementation, if at all, years away.

Politicians in Nepal seem to be regretting already. Nepali Congress leader Amresh Kumar Singh warned last July that Nepal’s federal experiment will fail. “Federalism won’t work in Nepal,” he told the BBC Nepali service. UML Chairman KP Oli recently reiterated that his party had accepted this “imported” agenda of federalism with the hope that it would help solve problems but it does not believe in it “any more”. You can expect other parties to disown federalism in the days to come.

When a country adopts a new political system, especially after a regime change, it generates a hope that something good is happening or will happen soon. The sense of euphoria keeps people optimistic.  Federalism has failed to raise that optimism.

Federalism as a failed project has already found a space in public discourse but it is unlikely to go away unless there is a dramatic change in politics. The current mood among politicians seems to be let it go in its own way.

That will be even more dangerous, warn analysts. “If the federal aspirations of Madheshis are not properly addressed, there is extreme likelihood of a secessionist movement emerging. Secessionist sentiment is strong among Madheshi yout,.” Claims commentator and analyst CK Lal.

Can’t that disaster be prevented? “Had proportional representation of Madhesh been reflected in the structures of political organizations, if genuine attempts had been made to lift Madheshis through reservation system, if situation was created whereby Madheshis saw themselves in state organs, then things could have been different” he said, “but this phase has long passed.”  “At the moment there is not a single figure to assure Madheshis that their aspirations can be met without federalism.”

Let us hope there is such a leader. Let us revive that phase.

Former Assistant Secretary-General of the United Nations Kul Chandra Gautam says, “Unlike democracy, human rights, non-violence and pluralism, federalism is not a universal value or norm, but a political choice.”  There are only 24 countries in the world which have adopted federalism.

If you know there is the deep blue sea in front of you, must you still go and take a plunge?

The last ten years’ unsuccessful efforts to settle federalism dispute have made one thing clear: federalism cannot be resolved from political level because political parties can never come on the same page. If it were taken to a referendum, people would decide whether to go ahead with it. But political leaders are not ready for this either.

If you impose it through coercion, people, helpless as they are, will be bound to bear with it. But what good is the system that generates so much fear, so many anxieties and uncertainties even before it is implemented?