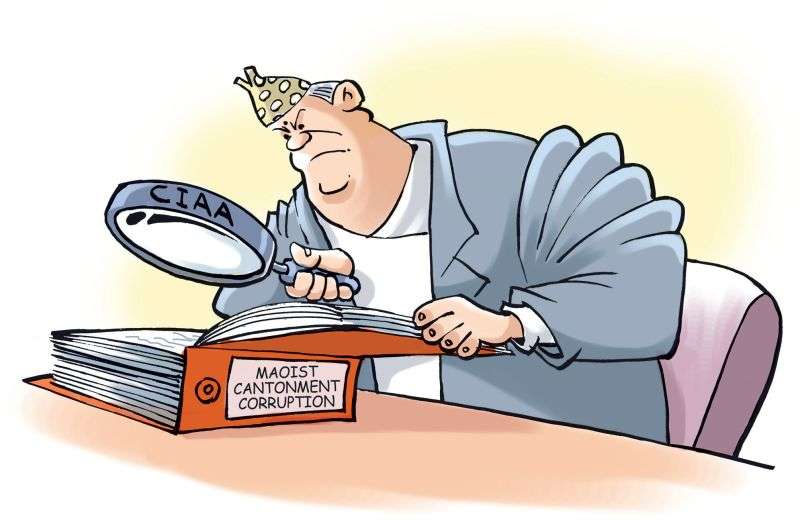 The announcement by the Commission for the Investigation of Abuse of Authority (CIAA) to accelerate the probe into the alleged corruption in the distribution of salaries and allowances to the Maoist combatants when they were housed at different cantonments across the country until 2012 is good news. This has revived the hope that those involved in probably the biggest corruption case in the country will be finally brought to book.

However, let’s hope at the very outset that the announcement by the anti-corruption body is not just a bargaining tool, as being claimed by some analysts, of CIAA chief Lokman Singh Karki whose very appointment as the chief commissioner of CIAA some three years ago is being reviewed by the Supreme Court.

The alleged corruption in the Maoist cantonments represents the biggest financial embezzlement in terms of the amount embezzled. The scale of corruption may be debatable but there is no doubt about the corruption which persisted in the Maoist PLA cantonments. When the cantonment corruption was a hot topic, the corruption in this scam was estimated to be as high as Rs 4 billion. The scam was widely covered by the Nepali media with news reports even claiming that Rs 40.5 million invested in the Janamaitri Hospital actually came from the money siphoned off from the allowances of PLA fighters.

The cantonment corruption was committed in three ways.

First, there was a monthly deduction of Rs 1,000 from each combatant registered in the cantonments, who numbered 18,525. This sum is estimated at Rs 1.14 billion. Back then several Maoist commanders had publicly said that 60 percent of this money was transferred to the party headquarters.

Second, the party (back then called the UCPN-Maoist) continued to receive salaries and allowances for 2,432 absentee combatants. Some commentators had gone to the extent of saying that these combatants never existed. The total amount embezzled in this way is estimated to be around Rs 1.34 billion.

The commissions charged to the suppliers of rations to the cantonments were the third source of corruption. News reports had back then claimed that the Maoist commanders had charged a 20 percent commission to the ration suppliers. This is estimated to be not less than Rs 600 million.

The first source of corruption may be dodged as voluntary contributions and the third as a pure hoax aimed at defaming the Maoist party. However, the second source - drawing the salaries of absentee combatants – shows that those involved had robbed the state coffers in broad daylight. The Maoist leaders and commanders had done this deliberately.

In fact, it’s not only the Maoist leaders and commanders who seem responsible for the huge embezzlements but also the government officials who were responsible for releasing the funds to the combatants. Some commentators have gone to the extent of claiming that the then government, donors, and even the opposition, were hand in glove in this massive-scale corruption.

Back then, the Maoist ex-combatants had themselves protested against this corruption. To silence the protestors demanding an investigation into corruption inside the PLA cantonments, PM Dahal’s party had constituted two commissions. The first commission, headed by Maoist leader Amik Serchan was mandated to probe the property holdings of party leaders and commanders. The other commission, headed by Post Bahadur Bogati, was asked to investigate financial irregularities inside the PLA cantonments.

While Bogati has already died – he died of cardiac arrest followed by a brain hemorrhage on 15 September 2014 – it is not known what happened to the report or if he ever produced one.  It was widely rumoured that these commissions could not produce their reports, most likely pressured by the very person who had ordered them.

For a long time, there has been a strong demand to probe this corruption case. But when this was a hot issue, the CIAA was without leadership. It didn’t have commissioners and a chief commissioner.

Then, after a long hiatus, Karki was appointed the CIAA Chief. But his appointment couldn’t spark any optimism as he was backed by Maoist chairman and current Prime Minister Pushpa Kamal Dahal as well. So, for three years, CIAA officials gave the routine reply that an investigation into the case was underway. The hope that those who had filled their pockets in the name of the peace process would be made to pay for their deeds had almost died.

Then, to the surprise of many, the CIAA recently announced that it was making preparations to summon the ex Maoist commanders and others involved, one by one. That has revived hopes.

But that means going after huge cats. From the current Prime Minister and Vice-President to former ministers and Maoist commanders, there will be a long list of those to be interrogated and possibly prosecuted.

The biggest question is: does Mr Karki have the guts?