‘A drastic slowdown in the construction business’ was a refrain after the country was hit by a major earthquake last year. But, proving the notion wrong, CE not only remained resilient to those changes but managed even the worse situation in its stride. Seeing greater opportunities in the sector in the coming days, CE Construction is accelerating its business activities more than before. “We have already launched about four housing projects and receiving highly positive response from our clients. We are also involved in infrastructure development projects. Our hydropower construction project is going on at full speed and the company is planning to upscale in the coming days,” says Bijay Rajbhandary, Chairman and Managing Director of CE Construction.

According to him, after the earthquake, the construction business faced a period of stagnation due to an unstable political environment, social disorder and economic uncertainties that put businesses on hold for quite a while. The crisis was aggravated by the prolonged amendment process of laws and bylaws that halted the launching and promotion of new projects for some time. “Similarly, the ongoing projects were also delayed due to financial re-evaluations as required,” he mentions. 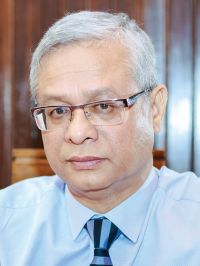 Explaining what the situation was like after the earthquake, Rajbhandary says, “Before overcoming the distress of the earthquake, businesses were further burdened by a series of ensuing obstacles due to the amendment in bylaws and unofficial blockade imposed by protest groups after the promulgation of the new constitution that resulted in a fuel, raw material and labour crisis which subsequently affected the turnover of the company. Nevertheless, after the end of the Terai stir, things have become normal and slowly the construction business is picking up.”

“Despite all the hurdles, we managed to keep the ball rolling. The projects were affected but not stopped even for a single day and we are running 38 projects at the moment,” he adds.

High-rise buildings have remained a dicey subject since the earthquake but, clarifying on the safety of such buildings he mentions, “We have followed engineering standards while constructing them and the buildings have proven to be earthquake resistance as the structural members are still intact.”
“After the earthquake, most of the residents have come back to their apartments, except for a few due to psychological fears,” he continues. The violent earthquake and its subsequent aftershocks did little damage to apartments constructed by CE Construction. Some cracks and damages on the walls were observed, nevertheless, there was no damage to the structure.

According to him, it might take some time for people to regain their confidence in apartments like before but gradually they will overcome the fear and start living there normally because as far as cities are concerned, it will be cost effective for them to buy apartments with modern facilities than to build houses on their own.

Though the natural disaster caused widespread destruction and loss of lives, Rajbhandary says that earthquake has proved to be a tremendous opportunity for companies like CE that believe in quality construction, timely completion of projects and cost effective works.

Quality in construction has always remained a top priority for CE. “We focused on constructing earthquake resistant engineering structures ever since we started our business 24 years ago,” he says. “All structures designed and built by us can withstand earthquakes of a eight magnitude in the Richter scale.” And that is the reason why all our projects are safe even after the earthquake, shares Rajbhandary.

The company relies on three major components to assure the strength of its construction work. “First is the design. Second, is the construction methodology and third is the use of the building materials,” he informs.

Elaborating on the engineering part of the construction, he mentions that the designing of the high rise buildings includes elements such as making a geological survey, investigating structural designs and managing the safety factor. “The construction methodology is important as high-grade concrete is used in high-rise buildings to maintain the strength of the structures. We select construction materials with optimum quality for the purpose,” he says, adding, “Also, there is the testing methodology and quality control mechanism to ensure safety of our structures.”

“We are running this company focusing on the quality and reliability of the structures we construct.  Very few companies work like this,” opines Rajbhandary. He claims quality is the major strength of the company, which has already been proved. “Similarly timely completion is our next significant point. We are competitive because of quality and timeliness. And that is why we have so much demand in the market.”

Answering the twists and turns of the company since its establishment in 1992, Chairman Rajbhandary says, “It’s like a roller coaster, which is well anticipated. We are very much clear about where we are heading towards. And we are achieving more than what we had anticipated so far.”

A couple of years back Nepal Rastra Bank (NRB) tightened bank lending on real estate causing a sharp downturn in the real estate business. The central bank’s decision made it difficult for banks and financial institutions to provide loans in the real estate and housing sector for a while.  “During that period we had a hard time to manage cash flow,” recalls Rajbhandary.

Similarly, he points to the electricity shortage as one constant problem faced by the construction business. “Due to the severe energy crisis, many industries are not able to produce raw materials and construction materials. We also could not execute the projects to the extent we should have,” he adds.
Nevertheless, CE Construction has gained a strong foothold in the country’s construction sector fighting against the odds. “We continuously assess our expertise, evaluate the associated risks and manage the uncertainties. We have been able to keep growing our business going through hurdles and obstacles,” mentions Rajbhandary.

CE Constructions has completed about 268 projects. The company has recently launched four housing projects which have been successfully marketed. “We even started the construction of a hydropower project which is going on at full speed,” he informs.

Rajbhandary points out the lack of manpower including experienced engineers, supervisors and workers in the construction sector. He says, “We are mostly managing Nepali manpower besides a few workers from India. CE Construction is providing employment to 3,500-4,000 people. According to him, the human resource of the company is broadly divided into four categories as permanent staff, project staff, daily wages and sub contract employees. There are around 300 permanent staff, 500 project staff, around 2,000 daily wages employees and around 600 sub-contractors working in the company.

Analyzing the Nepali construction business, Rajbhandary opines that most companies are not professionally managed. “Many companies do not understand the construction methodology of projects and lack proper technologies. Nonetheless, there is a significant improvement in the capabilities of domestic contractors,” observes Rajbhandary.

The company is involved in numerous CSR activities. “We conduct blood donation programmes once a year,” he says. He informs that the company is providing scholarship programmes to blind students.” The company also made the designs of public buildings damaged by the earthquake free of cost. To motivate youths, CE provides free mentoring and guidance to young entrepreneurs.

•    After the success in apartment and housing sector, the company has now forayed into the hydropower sector
•    Plan for town-ship development

CE needs to rethink its strength in timely construction either being realistic while signing agreements or reviewing its performance on time. One should not justify delays by other factors but accept the reality. My suggestion will be to be realistic in time management and be upfront and say 4 years completion time instead of 2 years based on my own experience of prime colony, Panipokhari heights and not forgetting grande Towers. True the are factors beyond CE but these are realities in Nepal and that will continue for years. CE is brand now in construction and should strengthen its monitoring to address problems and weaknesses at project level by project managers instead of senior management having to deal. I am suggesting having closely watched projects in prime, Panipokhari and grande towers. CE should adopt model of phasing of projects over expansion. Learn to close projects and start new phase as it is important for clients to get the feeling of completion specially in housing and apartments. Best wishes for CE in your endeavors and hope while entering in hydropower sector you are not putting extra load on the same management but it's different management for hydro and real estate.

Very nicely expressed about plan, achievements and threats. Nice presentation.Wish him and their professional organization CE Group for the success in future..