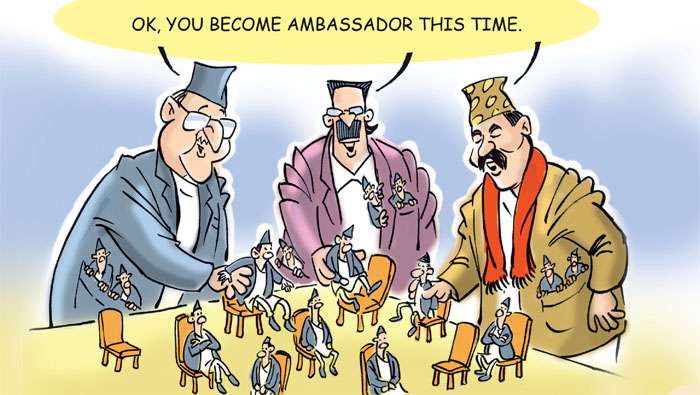 These are tough times to be representing the country abroad. Although Nepal now has a constitution, and hence the decade-long political transition has formally ended, disagreements over the new charter continue to fester, both in and outside the country. Many members of the international community with which Nepal has diplomatic relations, it seems, are confused about some provisions of the new constitution, particularly those relating to federal demarcations and citizenship. Otherwise, it is hard to make sense of the likes of the United Kingdom and the European Union urging Nepal to make its constitution more inclusive. Have those involved in drafting such statements on Nepal taken the trouble to go over all 160-odd pages of the new constitution?

That is doubtful. Of course, it would have been of great help if, in the months following the promulgation of the new constitution—the time, most notably, of the four and half months of Indian blockade—we had resident ambassadors in countries like the UK, Germany and Belgium. They would have been there to clear any misunderstandings over the new charter. This was why the absence of ambassadors in 22 Nepali resident missions abroad was so galling at the time.

Though late, this has been taken care of now. The government on April 19 nominated ambassadors for 21 countries. One of the big questions, however, is have the right people been appointed to these crucial posts?

The main opposition, Nepali Congress, and the Tarai-based parties were, apparently, not consulted. Some people insist that even those appointed on political quota have some sort of experience in foreign relations. That might be so but surely the parties in the ruling coalition could at least have consulted the main opposition parties. Their support will be vital if the proposed names are to be cleared by the Parliamentary Hearing Committee, a mandatory step. But the problem is that the hearing committee does not currently exist, largely because of differences between Nepali Congress and CPN-UML over whether to elect a new committee or continue with the old one. In this situation, it was even more important to garner bipartisan support for the new envoys.

But should political appointees rather than career diplomats be appointed as the country’s representatives at all? This is not an easy question to answer. But the Supreme Court (SC) has already set some guidelines. On August 13, 2015, the SC had ruled that the government of the day must clearly lay out the criteria on the basis of which new ambassadors are appointed. This, said the apex court, would bring the appointment process in line with international standards and add to its legitimacy.

It hasn’t been even a year since the country’s apex court issued the order. But it seems Nepal’s rulers today can comfortably ignore even the apex court’s rulings as no clarification has been furnished in the case of the latest appointments. The names of some nominees are suspicious because unlike what the ruling parties say, these nominees have contributed next to nothing in the foreign policy arena. Some of the nominees are even former ministers. In terms of hierarchy, the post of a minister is much above that of an ambassador. Similarly, one of the ambassadorial nominees was appointed the Chairman of Gorpkhapatra Sansthan during the UML’s government in the mid 90s. Now, when there is again a government led by the UML, he has been rewarded with ambassadorship. Newspaper reports published after the news of these nominations have claimed that many of the political nominees cannot even communicate in English.

These are just examples. In fact, the whole process was shrouded in secrecy until the final names came out. This suggests that the government feared a backlash if the decision on new envoys was made public. Such secretive dealings were certainly not what the Supreme Court had in mind when it called for more transparency in the appointment process.

Rewarding supporters with cushy jobs, including ambassadorial positions, is an old tradition. In Old Nepal, kings used to appoint those loyal to the crown to such posts. In New Nepal, the politicians are doling out ambassadorships to party supporters and loyalists. This time too, the names of the political appointees have come out of the pockets of the top politicians of the ruling parties. This is sad. Does the great change that the country is said to have embraced exist only on paper?

The process of appointing the country’s envoys abroad needs a serious review before the nation and its foreign policy become a laughing stock.