SDBL eMerging into the Future 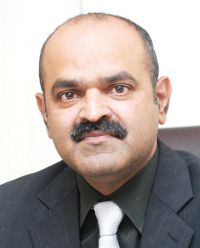 In a reflection of the times, Siddhartha Development Bank Limited (SDBL), one of the country’s top five national level development banks, is proceeding to merge into it Ekata Bikash Bank and Nepal Awas Finance as per the NRB directive for increasing the paid-up capital.

In all, once the merger happens, the bank’s paid-up capital will rise to around Rs 1.15 billion. “The Bank will meet the requirement through the issuance of bonus shares and right shares in the coming years,” informs bank's Chief Executive Officer Ajaya Kumar Mishra.

Further explaining reasons for the merger, Mishra says, “We chose Ekata Bikash Bank to strengthen our business base in the west of the country and Nepal Awas Finance for its unutilized capital base,” adding, “After the merger we will have a very strong presence in the western part of Nepal.”

Mishra agrees on the central bank’s decision to lift the paid-up capital of BFIs. “I think the NRB move to increase capital of BFIs is appropriate and relevant. Considering the national economy, macroeconomic environment and increased competition among BFIs, the level of risk is increasing day by day. So, to minimise the risk level by increasing the risk appetite of the bank, NRB’s approach to increase the capital base is justifiable.” He adds, however, that the two year time frame maybe of some concern, although Mishra is confident that his bank will meet the capital requirement in time.

The bank has been able to generate profit in the last two years. Though the bank was unable to provide a return to its shareholders in recent years, it has managed to provide an 11 percent bonus share from the profit and reserves of FY 2014/15. The net profit in FY 2014/15 stands at Rs 142 million. The volume of business has significantly increased in the last five years. Deposit and credit lending have increased from Rs 4 billion and Rs 3.69 billion respectively to Rs 6.98 billion and Rs 5.71 billion.

One thing that Mishra notes is that the central bank should simplify and speed up the merger of BFIs. “Delays in mergers can create a lot of issues and cause mergers to fail. Sometimes it takes four months to get LOI and another year to complete the process. If NRB simplifies its process, mergers can be concluded within six months,” views Mishra.

About SDBL
Siddhartha Development Bank is the first development bank of the western region. It was formally established in 1999 and started operating from 2000 as a regional level development bank. Soon it raised its paid up capital by 5 times and was upgraded into a national level development bank. This was a milestone in the Nepali banking industry and SDBL is the first which successfully and increased its capital base by five times. The total paid-up capital of the bank has been increased to Rs 715.9 million after the issuance of recent bonus shares of 11 percent. Currently, the bank’s deposit and lending stand at Rs 7.28 billion and Rs 6.37 billion respectively.

“We are focusing on consolidating the business and enhancing the asset quality.” Mishra stresses, “Our focus is on building a strong brand image of the bank.”

SDBL is the number one development bank in terms of ATM card users. The Bank has been providing its services from 18 branches and 19 ATMs located at various parts of Nepal from Biratnagar in the east to Dhangadhi in the west.

“We are innovative and are continuously responding to the demands of our customers from the urban areas to the rural. We focus on customer choices and preferences,” states Mishra. The bank currently has around 90,000 customers.

Market Strategy
The bank considers commercial banks as competitors and has developed different credit and deposit schemes to attract customers away from commercial banks. For example, it has been working at lowering the cost of funds by seeking low cost deposits so that credit can be lent at low competitive rates.

Products and Services
“We have a unique product called the ‘Siddhartha Retirement Fund’ in which we manage the retirement funds of more than 10,000 employees and 350 institutions. It is approved by the Inland Revenue Office and we have a very large clientele,” reveals Mishra. Other services the bank has introduced cover home loans with life insurance policies, and mobile banking services. Its SDBL Trust Remit service has around 1000 agents across the country.

CSR
The bank has employed the differently-abled and has distributed stationery items, clothes etc to homeless children, orphanages at various times. The bank has also been active in Lumbini and helped at various old age homes. “We also served the victims of the April 25 earthquake,” says Mishra.

Weaknesses/Areas to Improve
•    The bank needs to recover some problematic loans. Management has been working to recover these loans

Opportunities
•    Due to NRB recent policy to increase paid up capital, there will be sharp decline in the number of development in Nepal
•    After the current political unrest and implementation of New constitution, market will witness sharp growth and there will be ample of opportunities for stable and strong banks