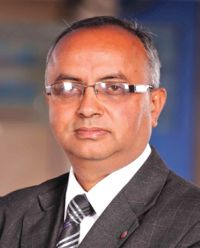 A good way to assess Ngadi Hydropower’s journey so far would be to weigh its current achievements with the targets and aims it had laid out at its inception. Ngadi Group Power Ltd. was founded in February 2006 as private limited company and later in June, 2014 it was converted into a public limited company.

“We started from scratch, the progress that we are witnessing right now is satisfactory,” says the company’s managing director, Shailendra Guragain, while adding, “We do not have many products to sell in the market. All we do is produce energy to make sure that no one lives in the dark.”

Identifying itself as a company with technically feasible and environmentally sustainable hydropower projects, the power company says it is committed towards operational excellence, good governance and corporate citizenship.

Milstones
Guragain stresses that whenever an additional home in Nepal  gets electricity, he considers it as a milestone in the company’s journey. “As a trader in energy, we believe that our overarching goal is to provide electricity access to households throughout the country using highly skilled and experienced team members,” says Guragain.

Organisation’s Approach
Ngadi Hydropower makes a real effort to practice the principles of management effectively.  For this, in every different project it operates, it registers a separate company to shorten the financial hurdles and for the smooth operation of the projects. At present, the company has two projects-one is Siuri Khola and another called Super Nyadi Hydropower. Suiri project is already generating and selling electricity while for Super Nyadi, the company has received survey license and feasibility study is going on. The promoters duo Dr. Bhogendra Kumar Guragain and Shailendra Guragain are also promoters of River Falls Hydro that is promoting 3 projects in Eastern Nepal. The major promoters of this company already have experience of Barun Hydro power and Arun Valley Hydropower in which they are still directors. The company does not forget to make a positive impact in the livelihoods of the local population where it works either. “We have also been able to raise the living standards of the people living around the project site by providing contractual employment to the locals as well as others,” states Guragain.

Corporate Social Responsibility
The company’s approach to CSR is also hands on and on the ground. “All of our project construction sites are situated far from villages. Thus, in order to reach the site, we have constructed roads which provide access to many villages on its way,” says Guragain. “Wherever we run our projects, we have been able to completely change the face of that village.”

Strengths
Equipped with highly experienced professionals and dedicated team members, Ngadi hydropower has been able to encourage its staff members and excel at work. The company believes that gaining public trust by delivering excellent work can help build a relationship with the project stakeholder. “This, I believe, is one of the strengths of our company,” states Guragain.

Weaknesses
For any company in the sector dealing with foreign investors is a must in order to scale up the business. “While doing this, the management sometimes needs to negotiate with people who are narrow minded and need to take harsh decisions. Those decisions have sometimes proven to be costly,” admits Guragain.

Opportunities and Threats
With the increasing focus on energy and the realisation that energy security is the most important factor for the nation, Ngadi has taken this as an opportunity to scale up its business. However, the company laments that unclear guidelines and directions on the government’s side has been creating obstacles for further investment. “The risks posed by an external environment, especially from the policy makers, can hamper making predictions and threaten our company’s smooth operation,” points out Guragain.

Board of Directors
Ngadi group is equipped with experts as well as highly experienced professionals. The board member consist of Dr. Bhogendra Kr. Guragain as a Exectuive Chairman, Shailendra Guragain as  a Managing Director, Dinesh Gurung as Director and Robin Subedi as Director of the company.

Future Endeavours
Equipped with highly experienced professionals, Ngadi Hydropower believes it can build large hydro projects in the country. “We have the confidence to build even 100mw projects in the country,” says Guragain. It ultimately believes that it can produce electricity with the help of domestic investment, domestic experts and domestic human resources.

Projects Established by the Company
1. Siuri Khola Small Hydropower Project (5000 KW)
Located in Bhulbhule VDC of Lamjung district, the project has an installed capacity of 5 MW with a design discharge of 1.4 m3/sec. After the completion of first feasibility study of Siuri Khola Small Hydropower Project in 2005, the power purchase agreement with an installed capacity of 990 kW with Nepal Electricity Authority was completed based on the same feasibility study of 990kw capacity on 2006. However, this detail project study report carried out was prepared for the upgraded size of the project from 990 kW to 5000 kW for project implementation. The PPA was signed with NEA on February  2008.

2. Super Nyadi Hydropower Project (40.27 MW)
As per the application submitted to DoED for the Survey License on 2071/05/18, the project is identified for 40.27 MW. The Company has already signed with Clean Energy Consultants Pvt. Ltd. for the feasibility study of the project. Desk study report has finalized the project salient features and all the project components are purposed to be constructed at right bank of Nyadi river.

Stock Offerings
Recently, the company floated Initial Public Offering (IPO) for the locals of the project site and 486,868 units of shares (face value Rs. 100) have been already allocated to them. Now they are planning for IPO for the general public.

what is condition of ppa super nyadi hydropower.i am invester of this project and what is futur planing of project.so reply please

i am from tanahun district,is there any facilities as of lamjung district for ipo purpose.i am interested to invest.