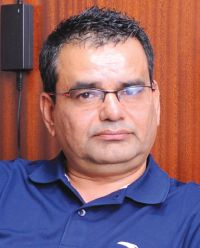 Nepal Bangladesh (NB) Bank Limited, which has IFIC Bank, Bangladesh, as a joint venture partner, has welcomed the NRB’s recent policy to increase the minimum paid-up capital requirement for banks. It is planning to go for a merger, issue right shares and further public offerings to comply with the new policy.
“We currently have a paid-up capital of Rs 2.43 billion. We will raise around Rs 2 billion through the merger, Rs 2 billion will be added by issuing right shares and the rest by issuing further public offering,” says CEO Gyanendra Prasad Dhungana.

The bank recently signed an agreement with IME Remittance, and now customers can receive money from around the world at all 31 branches of the bank. The main objective of NB bank, which has been in business for over 21 years, is to provide banking services to weak sections of society. This justifies the bank’s motto, ‘The bank for everyone’.

NB Bank provides services such as mobile/SMS banking, e-banking, debit card, utility payment, remittance, locker and branchless banking. The bank’s core value is to deliver quality and complete financial service by being accountable and honest and making efficient use of technology.

According to the bank, it has around 215,000 satisfied customers. Taking note of the present trend, the bank has come to a conclusion that it needs to focus on the retail sector (individual home/auto/education loans). Under this, the bank has prioritised loans below Rs 10 million for economy-class customers. “We also provide loans as per the necessity of the people,” says the CEO The bank has a total deposit of Rs 35 billion and it has issued loans worth Rs 26 billion (below 5 percent market share). Dhungana says, “There was a phase when we were unable to grow as our branch outreach was minimal.”

Dhungana believes that through mergers and acquisitions the bank will be able to expand its business, and increase deposits and lending by 10 per cent within two years. “Support from our loyal customers, regulatory and the staff’s feeling of team building will help us move ahead. We want to become one of the top five banks in Nepal within five years,” says CEO Dhungana. According to hem, the bank has formulated a 5-year strategic plan to be among the top 5.

Views and Plans of NB Bank on NRB Monetary Policy
NRB, under the new monetary policy, has directed commercial banks must raise their paid-up capital to Rs 8 billion within two years. CEO Dhungana says, “All banks have already submitted their strategies, as ordered by NRB.”

Opportunities
• With the promulgation of Nepal Constitution 2015, investment opportunities are going to increase in mega projects

The Bank’s Journey
The bank was established with ICFC Bank of Bangladesh as JV partner in 1994. “In the early days, the bank made good progress, but after some time it faced some setbacks for 5-6 years, and due to this, the bank could not grow,” recalls the CEO. “But if we look at data from the last five years, we have been able to grow by 30-40 percent per year,” says Dhungana.

The bank’s joint venture partner ICFC is a semi-government bank. The government of Bangladesh has a 24 percent stake in ICFC. Among 30 commercial banks, Dhungana says, the bank is among the top 10 in terms of profit.

The bank’s management was once taken over by NRB due to corporate governance and lending issues. “NRB, after recovering a loan of Rs 3 billion, handed over the management to old promoters,” he says. “This was one of the bad moments for the bank.”

He says, “After that there has been no looking back. After NRB’s handover, we re-structured the bank and introduced massive changes. Even our joint venture partner raised its stake to around 28 percent by adding Rs 1.25 billion.”
The bank is now under the control of ICFC, and there is minimum presence of local promoters, due to which there is no interference from the board of directors.

“Our last five year growth figures stand at around 30-40 percent, and if we continue at this speed, we will able to catch up with other banks in 2-3 years,” says Dhungana.