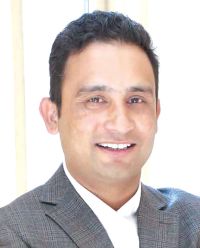 When a team headed by Sulav Budathoki took over a standard college in Kathmandu in 2003, it had only six students. There was a year’s rent still left to pay and staff salary overdue by a year. But the new management managed to turn things over. This is the story of Islington College. Back then, when Budathoki arrived, it was known as Informatics, teaching computer courses. And now after an interval of 12 years, the college is affiliated with a UK university and has around 1200 students studying a number of subjects from business to IT.

“We are growing vertically and horizontally,” says Sulav Budathoki, CEO and Chairman of Islington College. Only three IT programmes were offered in 2009.Now the college conducts advanced studies. It started BBA courses in 2012 and in 2014 added courses leading to an MSc. Not to mention teaching A levels as well.

“Furthermore, we have expanded to Biratnagar, Pokhara and next year, we are establishing the Itahari International College in Itahari,” adds Budathoki.

Background
A college was first established in the area in 1996 with the objective of providing IT training courses to students and the general public. Known as Informatics it was a direct franchise of the Singapore based Informatics College.

Then in the early 2000s Budathoki acquired the college and started laying the foundations for its current academic reputation. By 2009, when it was still known as Informatics, Budathoki realized that something more was needed.“At that point in time there was no direct affiliation available with UK Universities and we used to run courses through Informatics College of Singapore,” he shares.

The college also understood that affiliation with a UK educational institution was important not just for prestige but to also stem the flow of students going abroad.

“Later on, in 2009 looking at the students in own college and the number of students going abroad for further studies, we realized the need for direct affiliation with a UK university. We achieved this in 2010 and started our direct partnership with London Metropolitan University,” says Budathoki, becoming the first college in Nepal to work in direct partnership with a UK university.

The name change from Informatics to Islington College happened once the college started working in direct partnership with the university.

“The main reason for changing the name was to fulfill the requirements of the university,” Budathoki reveals. Islington is the name of a borough (or a municipality or ward)in London. Advantages for Nepali Students
Students at the college pay 10-15 percent less than their UK counterparts while getting the same level of education.

The college currently teaches A levels and runs bachelors and masters programmes in computing, computer networking and IT security and Multimedia Technologies.

It also teaches business studies leading to a BBA degree. The college plans to launch its MBA degree next year.

UK Degree in Nepal
The degree offered by Islington is different in terms of content and method of teaching. Students conduct case studies in international scenarios using a regularly updated syllabus, a system used by many universities abroad.

There is also the foreign factor. “The recognition of an international degree is high and they have a higher chance of getting a job in comparison to Nepali university graduates,” Budathoki says.

Teaching at the college is done in university style with classes running from 7 am in morning to 4 pm in the afternoon with no shifts. But students at the college have to also be self-reliant with a number of self-study components, workshops and presentations.

“The most important factor of a UK degree is its high self-study component. You have to do a lot of research which develops the habit of understanding and adopting new technologies in real-life or work-life,” points out Budathoki.

Another important area of achievement is in entrepreneurship. Students from the college have established different types of successful businesses. “Based on our experience we are at least 15 years ahead of any other college offering similar courses here in Nepal,” asserts Budathoki.

An international education is not always expensive. According to Budathoki, it can be expensive than a local education but not that significantly. “At least Islington College is not expensive and the benefits are there, especially when looking at the value of things like direct supervision from abroad, direct certificates from abroad and worldwide recognition,” points out Budathoki.