NAC Starts Flight Expansion Plan
Nepal Airlines Corporation (NAC) has started daily flights between Kathmandu and Delhi, as part of its new flight expansion plan. The national flag carrier had recently acquired two new 158-seater Airbus aircraft from the European Airbus Company. NAC Spokesman Ramhari Sharma said that a one-way ticket would cost Rs 7,300 per person adding that NAC has plans to start flying to the Indian cities of Mumbai and Bangalore from June. NAC also has plans to fly to China and the UAE from September with three flights a week.

Daman Gets Hoteliers’ Attention
Hotel entrepreneurs in Makwanpur have initiated measures to bring to light the tourist potential of destinations in the district, including Daman. Mahendra Rawat, General Secretary at Makwanpur Chamber of Commerce and Industry, said that the chamber will be prioritizing the tourism industry in the district while claiming that “despite its potential as a popular tourist destination, Daman has fallen behind due to the lack of marketing.”
Daman is an ideal location for tourists to escape the monsoon heat but entrepreneurs claim that the lack of publicity has been the primary factor for attracting only a small number of tourists.
Daman and Simbhanjyang are popular tourist destinations situated in the hills of Makawanpur. Most tourists visit these places during November and December to enjoy snowfall.
Meanwhile, Everest Panaroma Resort in Daman has come up with a special offer under which it offers rooms at Rs 1,000 and Rs 1,250 including breakfast per person and Rs 1750 for a room and meals for two. It is also offering a 10 percent discount on holidays.
The establishment has been running for the last 23 years.
National Tourism Promotion Committee Set Up
The government has set up a National Tourism Promotion Committee to coordinate with stakeholders in tourism heritage reconstruction and international tourism promotion. The committee is headed by the Minister for Culture, Tourism and Civil Aviation, Kripasur Sherpa and the ministry’s secretary will serve as the vice president.
Members of the committee will come from different organizations related to tourism. “This committee will remain one of the high level committees and will coordinate in the reconstruction of cultural heritage sites, hotels, trekking trails destroyed by the earthquake,” Santa Raj Subedi, Secretary to the Prime Minister, said after the cabinet took the decision. He said the committee is expected to play an important role in re-establishing Nepal as a safe tourist destination for international tourists.

Paragliding in Palpa
Commercial paragliding flights have taken off in Palpa. “We launched this service keeping in mind Indian tourists who visit Nepal to escape the summer heat,” said Krishan Pathak, Director of Palpa Adventure Pvt. Ltd., the company which has started the service. He added that they equally look to entertain domestic adventure tourists. The company has a joint investment of Rs 1.50 million from a group of local youth entrepreneurs.
The flight takes off from the hills of Bandevi in Tansen and lands in Shreenagar after flying through Prabas, Tundikhel, Batasedada, Telgha, Madi and Sarai. As its launch price the service is available at Rs 5,500 for Nepali and Indian citizens. Later on the company plans to hike the price upto Rs. 7,000. The company plans to organize five hundred flights a year.

Qatar Airways Wins for Service Excellence
Qatar Airways has won three top aviation prizes at the annual Skytrax World Airline Awards, including winning Airline of the Year for a third time.
The Airline of the Year award is the top prize in the annual Skytrax awards category for service excellence. The award comes at a time when the airline has experienced remarkable growth, given the major enhancements to its fleet in the last 10 months, with the inclusion of the Airbus A380 and the Airbus A350.
In addition to the Airline of the Year award, the airline also collected two other awards, namely Best Business Class Airline Seat and Best Airline in the Middle East– which Qatar Airways has won for the eighth time.
Major recent enhancements have been introduced at Qatar Airways, including the opening of the world’s largest Business Class lounge, ‘Al Mourjan' at Hamad International Airport in Doha; a complete revamp of the airline’s in-flight entertainment system, Oryx One, and newly introduced amenity kits across all classes of travel; new on-board menus, check-in enhancements, and many others.
Qatar Airways' modern fleet is on display at the Paris Air Show 2015, the airline is showcasing the best of its latest generation of aircraft with five on display – the Airbus A380, A350 XWB, A320 and A319 and a Boeing 787 Dreamliner.
Qatar Airways, a five-star ranked carrier, is one of the fastest growing airlines in the world, operating one of the youngest fleets in the skies. Qatar Airways flies 160 aircraft to 147 key business and leisure destinations across six continents. 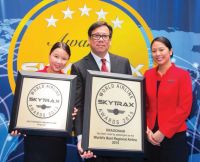 Dragonair Wins 4th Skytrax World’s Best Regional Airline Award
In a first for any airline, Dragonair has been named the World’s Best Regional Airline in the annual Skytrax World Airline Awards for the fourth time. No other airline has achieved this feat since this category was added to the awards in 2010. In a double accolade for Dragonair, the carrier was also named Best Regional Airline in Asia in the same survey.
The Skytrax World Airline Awards is the largest airline passenger satisfaction survey and the most prestigious among all the surveys measuring airline service excellence. Based on the votes of more than 18 million airline passengers from over 160 countries, the survey covered more than 275 airlines and assessed customer-service standards across more than 41 criteria including check-in, boarding, onboard seat comfort, cabin cleanliness, food and beverages, inflight entertainment and staff service.
“It is a very great honour to receive such recognition from travellers, and on behalf of Dragonair I would like to extend my heartfelt thanks to everyone who voted for us,” said Dragonair Chief Executive Officer Algernon Yau at the award ceremony at the Paris Air Show on 16 June.
As part of an ongoing effort to provide the best travel experience to its customers, in 2013 Dragonair embarked on a full-scale inflight product enhancement across its entire fleet. This has seen the introduction of new First Class, Business Class and Economy Class cabins together with a brand-new on-demand inflight entertainment system, StudioKA.
India Lists Nepal as Official Holiday Destination
The Indian government has included Nepal in its Live Travel Concession (LTC) list along with Sri Lanka and the Maldives. The list sets out countries as annual holiday destinations for government staff.
Prior to its inclusion, Indian government officials were not allowed to visit Nepal on government expense. In India, annually two million officials use the services of LTC.
At a programme organized by the Pacific Asia Travel and Tours Association (PATA)’s Nepal Chapter, in Kathmandu on June 6, Ranjit Rae, Indian ambassador to Nepal, said that the Indian embassy would continue to play a positive role in reviving Nepal’s tourism industry.
Rae further informed that the Indian government is also creating three new air routes between Nepal and India and said that these routes will soon become operational.
Suman Pandey, President of PATA, Nepal Chapter, stressed on PATA’s active role in reviving Nepal’s tourism sector. Similarly, Prabin B Panday, executive member of Hotel Association of Nepal (HAN), called on the association to present Nepal as a ‘Feature Country’ in the upcoming PATA Travel Mart scheduled for September this year. Visit Lumbini Campaign in Thailand
Visit Lumbini Campaign was recently organized in Thailand to encourage tourists to visit Nepal and assist in reviving Nepal’s tourism sector. Siddhartha Hotel Association (HAN Lumbini) said that the campaign promoted Lumbini and Boudha heritage photos and videos during a photo exhibition.
The exhibition was organized at the famous Saket Temple and other important tourist destinations with the active participation of NRNs living in Thailand, the Nepalese embassy and the Bangkok Municipality. Thai participants expressed their commitment to work efficiently to spread the message that Nepal is a safe destination.
Similarly Chandra Prakash Shrestha, President of HAN Lumbini elaborated on Nepal’s fight to recover from the earthquake and tried to assure participants that Nepal is still capable of serving tourists like in the past.
The exhibition displayed 110 photos and a documentary on Lumbini and Kaplivastu prepared by Chetan Pant.