Born to a family of farmers in Siraha, Dr Upendra Mahato later became one of the richest Nepalis. After the completion of high sc 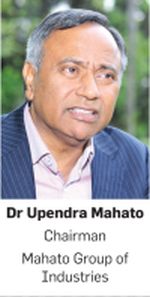 hool, Mahato migrated to Russia in a scholarship for an undergraduate degree in engineering. There he became a trader of electronic goods and jeans to sustain in the foreign land. After completing his Phd in Soil Mechanics in 1996, Dr Mahato commenced a crude oil refinery called Syntez Pvt Ltd in Belarus. Later, he bought a television manufacturing company in Moscow and further expanded his business interest there by opening an electronics supermarket and a fashion and sports mall. In Russia, Dr Mahato expanded his business activities into real estate and construction as well. He also bought a Belarus-based plant named Amkador that specialises in manufacturing heavy equipment.
Dr Mahato’s first and major investment in Nepal was in the year 2004 in Mero Mobile, the first private telecommunication company in Nepal that is now known as Ncell. Together with Jiba Lamichhane (another Russia-based NRN) and other NRNs, Dr Mahato has made significant investments in hydropower sector under Sanima Hydro, a group of hydro-related companies with investments from NRNs and general public. Mahato’s other key investments are in health, banking, education, media and communication sectors. Expanding his investments in Nepal, Dr Mahato opened a 350-bed state-of-the-art hospital in Kathmandu in 2017, Nepal Mediciti, which plans to expand to a 750-bed hospital in the near future.
In 2003, Dr Mahato founded Non Resident Nepali Association (NRNA), an association of Nepalis residing in different parts of the world, with a view to secure and promote their interest in and outside Nepal and leverage their potentials in the development of Nepal.