POLITICAL PARTIES : A Picture of Sleaze 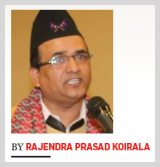 Durga Subedi had made a very relevant argument in a recent televised interview- “Girija Prasad Koirala was not able to manage this parliamentary system and the country is facing the plight today. By dissolving the government, the country was plunged into a cycle of mid-term elections.”

And then the UML formed a minority government under the leadership of Manmohan Adhikari. After that, Krishna Prasad Bhattarai won the election from Parsa, posing as the future prime minister in what was nothing but a design by Girija Prasad Koirala. That’s why, just a few months after Bhattarai became the prime minister, lecherous Girija started a signature campaign against Bhattarai (Kishunji), who was an epitome of loyalty and commitment.

The misfortune of the Nepali Congress started from that very time. In the words of Durga Subedi, “Girija Prasad Koirala committed a great crime which the country is suffering from today.” From that moment onwards, the process of handing over politics to the court began, and it was Girija who pioneered it.

Since then, the courts have been repeatedly empowered to make political decisions. Consequently, the court today has begun to look for its ‘share’ in the Cabinet; the allegations against Chief Justice Cholendra Shamser don’t seem to be unfounded. There has been a political drought to find such leaders like BP, Puspa Lal, Kishunji ,Ganeshman, Madan Bhandari and Manmohan Adhikari.

What have the so-called esteemed politicians like Sher Bahadur, Prachanda, Madhav Nepal, Jhalanaath Khanal, Ram Chandra Poudel, Dr Minendra Rijal, Dr Shekhar Koirala, and Sujata done? They are engrossed in the world of their own cadres. They have done a lot for themselves and their kith and kin.

How much do readers pay attention? Sashanka Koirala seems to be dressed in bizarre attires during the parliament sessions. I have never seen him in a typical dress (Daura and Suruwal). Parliament has its own dignity and the parliamentary sessions are watched by the world. But BP’s son does not have any etiquette, that poor fellow is roaring out that he will contest for the presidency. I have not seen him debate in parliament at all.

On the other hand, Dr Shekhar Koirala does not even fulfill a simple etiquette, when an ordinary person goes to his house. Due to this very ego, Lal Babu Pandit defeated him in the last election by riding a simple bicycle, along with reaching the people’s houses and seeking their ‘blessings’ (votes).

When we call Dr Koirala, he won’t pick up and will never call back. These leaders are the reason why the people are disgusted with the political leaders and this federalism. In an interview, Swami Ananda Arun explains about Kishunji for his own vested interests, not only the Nepali Congress but the country has also started going through an “Iron Age” (Kaliyug).

After that, the mindset of greed for money, power, filthy mud-slinging activities, despicable activities of parliamentarians and ministers, kneeling down in front of foreign powers began in the nation.

The Congress Party has ruled the nation the most since 2046 BS. But what have they done so far that we can be proud of? They may give a few examples, but that is the process of natural development. Any government, be it Panchayat, or any autocratic government, could have done that. In other words, natural development takes place in any system of governance. In the name of democracy, these (political party) idiots could not give anything but instead accumulated immense wealth for themselves and their families. From that time onwards, the criminalisation of politics and the politicisation of crime began to take hold in the nation.

The government destroyed the education of the country by appointing party-centered vice-chancellors and officials to obtain a contract for favourable private colleges. Almost all the government’s regulatory institutions have been eclipsed. They have been more party-oriented rather than making social justice their priority. The people running these institutions have been filling their pockets by strengthening their pawns under the name of democracy. Girija Pasad Koirala, in his greed to become the president, plunged the country into the abyss of secularism. So, he should be tagged as an “Institutional Terrorist” of the nation.

Now Sher Bahadur Deuba’s old history is being repeated- as an incompetent person to rule the nation. The decision of the cabinet – abolition of land commission, disappearance of Jaisingh Dhami, cancellation of 1,400 road projects, money laundering scandal, gift of a minister to a judge, and the Motipur shootout are the most deplorable events of the nation. Deuba has already handed over the very existence of the Nepali Congress to Prachanda and company. The Congress Party is getting worse day by day.

Looking at the formidable political imbroglio of the nation, it seems these leaders will swallow the republic. The condition of the Supreme Court has been public for a while. The Supreme Court has had 21 chief justices from Vishwanath Upadyaya till date. With one or two exceptions, serious allegations have been made against all chief justices. The seed was sown at the time of Girija Babu. The same seed has borne fruit now. Consequently, people have been watching the pathetic plight of the Supreme Court.

We used to see political leaders walking around in torn slippers just a few years ago. How on earth have they become billionaires now in an interval of just five to 10 years? Enough is enough. The water has spilled over the pot. Now, we, the people, ought to be the watchdogs and if needed, chase them with a stick or else they will keep deceiving us and plunder the resources of the country.

Now, let’s make a written draft for them and ask them what they will do for us. If not, let’s give them the option to choose the punishment themselves: a) To walk around the village wearing only underwear, b) To shave their heads, c) To hand over their property to the nation and d) To evict them. And ask them to sign the draft for future proof.

The Congress Party began a very dirty, filthy and undemocratic culture 30 years ago, and the same was learnt by the other political parties.

Today we can see that the police department, the bureaucracy, the CIAA, and now the image of the Supreme Court has been completely eclipsed. Government entities such as the airlines, oil corporation, Bansbari Shoe Factory, Janakpur CigaretteFactory have been dismantled. Now, we have to wake up. How long should we keep tolerating them even though they have been cheating, robbing and enslaving us!

Until and unless a stable government is formed, the economic development of the nation will just be a mirage. However much we may shout at political parties, the fact is that it is political movement and vision that can only lead the nation on the way to economic development. Thus, we need young, creative and innovative leadership that can transcend the nation. The leaders, since BS 2036, have still been licking the butter from the can under the name of sacrifice and contribution. They should be completely boycotted from the mainstream and only then will we see a ray of hope.

(The author can be reached at [email protected])