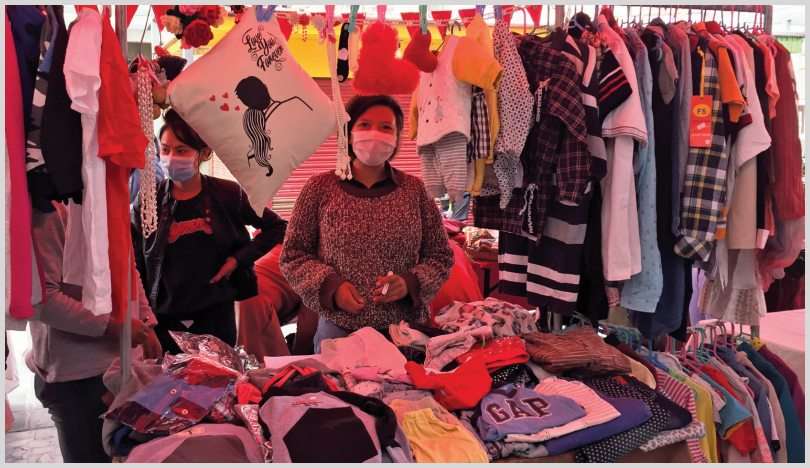 While the culture of thrifting is already popular in western countries, it is still in its nascent stage in Nepal. But Nepali youths today have been gradually adopting this concept of shopping.

Thrifting is shopping at a 'thrift store' or a charitable organisation usually with the intent of finding interesting secondhand or preowned items at low prices. The rise in popularity of thrifting culture in the western world is based on it being considered as eco-friendly as it reduces waste products that are disposed at landfills and encourages people to reuse and recycle products and supports the circular economy. 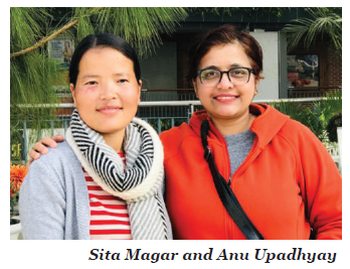 One such store in Kathmandu is Mom’s Store Nepal which sells used children's clothes. Apart from selling 'thrift' clothes from its physical outlet situated in Hattiban, Lalitpur, and website, they have also created an app called ‘Momtah’. Sita Magar, founder of Mom’s Store Nepal claims no website or app in Nepal sells used children’s clothes. The app allows everyone, besides the owner of the app, to post their products.

While some Facebook and Instagram-based businesses buy and sell used clothes, the identity of the sellers and buyers of the products appear on the sites, which many find uncomfortable. But the Momtah app conceals the identity of the users. Through the app, people who want to buy goods can directly contact the sellers but both parties do not need to reveal their identities while doing business.

In addition, the app also has an ‘Ask an Expert’ feature which allows mothers to directly contact a doctor and talk about any problems their childrens might have. For this, the company has collaborated with a pediatrician and nurse from Teaching Hospital, Maharajgunj.

The app, which was launched a few months ago, has more than 100 users. Sita says that the app still has many developments to incorporate, which they are working on.

Idea of Inception
Sita was on maternity leave when the Covid-19 pandemic started. All the stores were completely closed except for the grocery shops. The clothes that Sita had for her son were only going to last for a month. As her child started growing, she needed more clothes, but she did not have any clothes that would fit her child. “As the clothes were not enough, I even used my daughter’s clothes for my son,” she says.

Although she needed help, she could not ask anyone. She had thought of asking her neighbours, but she could not as there was no such culture in Nepal. In the meantime, she saw other mothers who were also worried about how to manage clothes for their growing children during a time when all the clothing stores were closed. In addition, she also found many mothers who had lost their jobs due to the lockdown and low-income families facing difficulties providing clothes for their children. Being a new mother, she could relate to the problems of other mothers.

After seeing such a situation, Sita thought of forming a group where mothers could donate, sell and buy clothes for their children. She then shared her idea of selling used children’s clothes to her friend Anu Upadhyay. Anu and Sita, who have been friends since 2017, were in the same group of the Australia Awards Scholarship. During their stay in Australia, they experienced the thrift culture there. So they decided to start a Facebook group ‘Moms Store Nepal’ in October 2020. "As both of us are mothers, we posted our children’s old clothes in the group initially. We also asked other friends to join the group. After receiving a good response, we decided to move forward with a social enterprise model,” says Sita.

Along with Anu, Sita partnered with five other like-minded people Hishi Tuladhar, Barsha Poudel, Sunita Thapa, Sanju Rajak Shrestha and Suman Kunwar, and formally registered the company in August 2021. At present, 13 people are working with them.

Challenges
Before starting the company, the team had done a survey to gauge general opinion. The result showed that many people were hesitant about buying used clothes for their babies. According to them, mostly people aged between 35 to 40 had a problem regarding this idea.

Sita shares her experience from when she was abroad where she saw many people look for and use thrift stores. But the mentality of people, here in Nepal regarding thrift products is still not developed. “So, the people’s mentality is the main challenge for us as the idea of thrift is comparatively new in Nepali society,” she adds.

"Especially, in the case of children, mothers are a bit reluctant in using used clothes," says Upadhyay. "As every child is special to their mothers, they prefer using the new ones for their kids. So, to change this perception, we are trying to make people aware of why it's ok to use used clothes through podcasts and public service broadcasting."

Apart from this, the lack of ideas was also a hurdle for them. As they had no idea about the process of registration, the registration of the company took a long time.

Likewise, due to the pandemic, they could not collect the donated clothes. “Our plan to open a couple of outlets was postponed due to the pandemic,” says Sita while Suman Kunwar says there are challenges, but one has to seek opportunities in them. They used to sell the products at the Saturday market at Labim Mall. However, it was affected after the second wave of the pandemic hit the country. After being forced to shut down the physical store, they looked for an alternative and developed the Momta app. According to Sita and Anu, Suman himself developed the mobile app.

During the course of their business, they faced other challenges. As a thrift store, customers want products as cheap as possible. But as the app allows everybody to post their products and prices according to their wish some products may be expensive. "This problem has reminded us that finding the right balance in business remains a challenge," says Sita.

Sustainability through Thrift
Besides doing business, Mom's Store also aims to contribute to environmental causes. “We ask people to donate. It is because we want to develop a humanitarian culture. Similarly, we want to make people aware of the possible impact the production of clothes may have on the environment,” says Suman.

According to him, producing 1 kg of linen results in the production of 15 kg carbon dioxide. Likewise, 1 kg of linen consumes 2,067 litres of water which equals 21 bathtubs. By revealing this data, we want to motivate people to adopt sustainable fashion and contribute towards environmental protection, the group says.

According to them, the startup has been able to save 10,735 kg CO2 fashion footprints. Also, through different events and programmes, they make people aware of the importance of sustainable practices such as recycling and upcycling.

Revenue Model
Mom’s Store Nepal collects, washes, maintains and sells the used baby clothes which are received as donations. The company has processed and sold more than 1,000 garments and toys to date.

Besides this, they also work as a marketplace for the crochet products such as sweaters, socks, hats made by housewives. Apart from this, they also sell other products through their website and charge a certain percentage as commission. In addition, to bring factory surplus into the circular economy, they collect extra textiles and make new products such as scrunchies and key rings from those surplus clothes and sell such products at minimal prices.

The company's founders say they have invested around Rs 1 million till now. This includes operation costs, infrastructure and app development. “More than cash investment, we have invested our time and expertise in this company,” says Suman. Since the company is registered as a not-for-profit entity, they reinvest the profits generated from the sales instead of distributing it among the founders.

Although the target customers of Mom’s Store Nepal are from the low-income group, they say that most of their customers are educated, who are aware of environment protection and sustainability.

Though it has only been a year since the company was started, Mom's Store Nepal has been seeing its customer base growing steadily. According to Sita, as soon as the situation becomes normal, they will move ahead with their plan to open new stores.