This Nepali company aims to become one of the leading power system services company by 2025.

In its 21 years of operation, Cosmic Electrical Engineering Associates has achieved many milestones working in the area of the electrification of the country. Established in 2000, the electric power system services company has received ISO 9001:2015, ISO 14001:2015, OHSAS 18001:2007 certifications that speak of Cosmic’s service and compliance. According to Er Mahesh Mahato, managing director of Cosmic Electrical Engineering Associates, the company has relentlessly pursued achieving excellence in services, innovation, corporate governance, community engagement, environment-friendly development along with safety of its staff since its inception. “Last year when many infrastructure development projects were stalled due to Covid-19 disturbances, we completed more than 50 percent of our running electrification projects during lockdown,” he says. 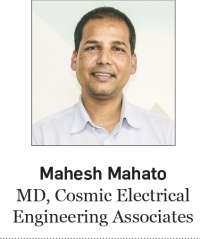 Cosmic Electrical started as an engineering consulting firm to work in the power sector. The company is active in construction of transmission lines, distribution lines, sub-stations, electrification and also works in the area of switchyard installation and also provides maintenance services.

Mahato, who hails from Mahottari, after completing Bachelor's in electrical engineering from the Pulchowk Engineering College, established the company in 2000 without any prior business experience and a little investment. “At that time, consulting and project designing services in electrification were mostly provided by foreign firms and they were taking out huge amount of money from the country. On the other hand, engineers weren’t much into entrepreneurship. I observed this market gap and started my own venture,” he recalls. According to him, the company developed five-year plans assessing the business growth prospects for the next 15-20 years.

During the company’s inception, Mahato had thought about taking the company into construction of power lines and other services in electrification after working as a consulting firm for five years. “Back in 2000 when our company was established, only 40 percent of the country’s population had access to electricity, now it has reached 95 percent. As a company, it gives us the biggest satisfaction to contribute to the country’s electrification drive,” mentions Mahato.

In 2004, Cosmic Electrical started providing turnkey solutions for electrification projects and began to design and install electric systems in commercial buildings. Cosmic Electrical is probably the first company in Nepal to start such works because only foreign companies used to provide such services at that time. Another major turning point for Cosmic Electrical came in 2007 when the company partnered with the ABB Limited, a Swedish-Swiss multinational corporation which works in areas including power, heavy electrical equipment and automation technology. According to Mahato, the international partnership has proven very important for Cosmic in terms of quality enhancement and knowledge transfer.

It was in 2008 when Cosmic Electrical was awarded a Rs 130 million project of United Nations Development Project (UNDP) for the electrification in the Khimti area. This project became another turning point for Cosmic and the company completed it on time. “We were awarded the project because our technical and financial proposals were the most viable. The successful execution of the project gave a boost to business at that time when our annual turnover was about Rs 30 million,” he says, adding, “It also helped to enhance our capacity in executing projects.”

In 2010, Cosmic Electrical began working on electricity distribution network solutions. After 11 relentless years of quality service and management, the company received the ISO 9001:2008 certification in 2011. 2012 saw the company providing services to electric sub-station projects. “In 2013, we started operating electric transmission line infrastructures and sub-stations up to 400 KV as an engineering, procurement and construction (EPC) contractor,” says Mahato.

It was a Nepal Electricity Authority (NEA) project funded by the Asian Development Bank (ADB). The project was completed well before the deadline despite the mounting problems created by the earthquake and border blockade. “We created history at that time by concluding the project before the stipulated time,” he shares.

In 2016, the quality management certification of Cosmic Electrical was upgraded from ISO 9001: 2008 to ISO 9001:2015. In 2018 February, the company received ISO 14001:2015 (Environmental Management System) and OHSAS 14001:2007 (Occupational Health & Safety Management System) certifications. “It was a very different time for being a startup in 2000 in Nepal. Unlike today, the business ecosystem wasn’t supportive for startups,” he shares, adding, “I gained experience through the ‘learning-by-doing’ approach.”

As Cosmic Electrical was moving ahead diversifying its business in the power and real estate sectors, the company faced huge business losses due to lack of management skills among the people in leadership positions. Management know-how became important and Mahato joined an eMBA programme. “After the completion of my eMBA, a feeling came to my mind that the losses could have been averted if I had joined this programme earlier,” he says.

In 2018, Cosmic Electrical announced a strategic partnership with the US multinational firm General Electric (GE) for transmission line infrastructure development projects. “Strategic partnerships like this will further increase our efficiency,” says Mahato.

Cosmic Electrical has been a role model for many startups. Mahato observes that a vibrant ecosystem has been created for enterprising youths of today which was absent when he started the company. “A good support system is being developed to aid startups to realise their potentials. It was absent two decades ago when aspiring youth had to manage everything themselves,” he recalls.

Cosmic Electrical is in the process of setting to set up a subsidiary which will work as a supporting partner for startups. The name of the new entity is ‘Cosmic Alliance’ which aims to support startups through equity funding, venture capital investment and mentorship. But the problems created by Covid-19 pandemic have hindered the launch of the new entity. Mahato is hopeful that Cosmic Alliance will come into existence after the difficulties created by the pandemic are over.