KITAB YATRA : A Journey into the Business of Books 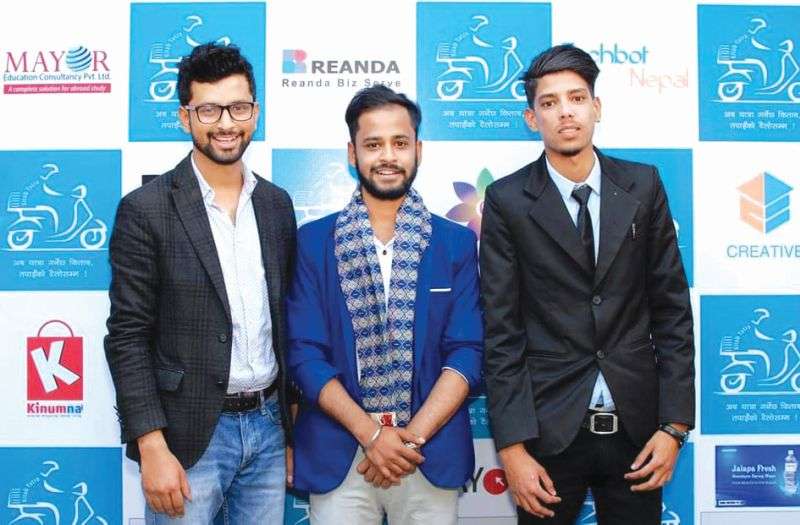 This exemplary startup is working hard to face the current challenges in its mission to make it easy to buy books online in Nepal.

Some journeys are planned, while some are started out of an interest. It won’t be otherwise to say that the journey of ‘Kitab Yatra’, which has been delivering books to the doorsteps of their customers for the last three years through their online shop, was born out of an interest or trend.

Rishi Ram Adhikari, founder of Kitab Yatra, who was studying Chartered Accountancy (CA) in Delhi, surprised many by dropping out of college in his final years.

Originally from Lalbandi, Sarlahi, Adhikari had seen how difficult it was for people to find books of their choice.  As an individual interested in literature and history, he too used to go to the market near Lalbandi to buy books.

While studying in Delhi, Adhikari started writing about the plight of Nepali students and workers in India. His passion for literature and his experience working as a journalist for five years made him start to question why he was in Delhi studying CA.

During his time in Delhi, Adhikari got the opportunity to learn about the world of online business, which was the reason why he gave up his studies to start business. He had also taken the suggestions of his friends Sudan, Badal and Praveen who lived there together with him.

“After deciding to start an online business in books, the company’s name ‘Kitab Yatra’ suddenly came up one day when I was in the toilet,” he laughs.

Thinking that it would be easier to work on the idea with friends than alone, he approached two of his friends, Kripesh Kishor Ghimire of Dang and Bikesh Bhattarai of Hetauda, who were also interested in starting a business like Adhikari.

Afterwards, Adhikari returned to Nepal from Delhi via the Raxaul border carrying three sacks of books. “The journey started by carrying books worth Rs 27,500 which was the beginning of Kitab Yatra,” he says.

Before buying the books, he notified the users of the book discussion group - 'Bookaholics' on Facebook - to tell him if they needed books that were not available in Kathmandu. He received an overwhelming response to that post. There were even some well-known writers ordering the books. According to him, within a few days he had earned Rs 45,000 from the books.

Kitab Yatra was then formally registered.

"We started the work by renting a room in someone else's office due to our low budget," recalls co-founder Kripesh.

Another co-founder, Bikesh adds, “Instead of tables and chairs, we bought five cushions. We even asked for help and used the printer and other basic things from the same office.”

Initially, the trio used to carry the books themselves and rush to the customer’s house. That rush meant there was a huge gap between the pre-market analysis and the real situation.

Although they received customers, they had to spend months trying to convince publishers.

Rishi says, “As the idea was new, it was difficult to get books from publishers. Our first three months were spent trying to convince that it would be easier for both readers and publishers.”

During the initial phase of business, literary figures and the media supported Kitab Yatra while social networking by the founders also helped the company expand its scope. Particularly, Rishi's journalistic background helped to promote Kitab Yatra. Despite the lack of resources, there were many people searching for books through social media and websites which was a factor of encouragement for the team.

The journey, which began with books bought on credit from a few publishers, now has books from more than 70 publishers. Within the three years of its inception, Kitab Yatra has become an established name among readers who buy books online. As a facilitator between the readers and publishers, the company is also serving Nepali book lovers who are living outside the country.

Rishi says, “Some readers are not used to going to the website and placing orders. So there is a facility to order through any medium.”

Located at Thapa Gaun, Kathmandu, Kitab Yatra delivers books within a day of receiving an order in the Kathmandu Valley, three days in nearby cities and one week in other places outside the valley. They have now expanded their reach to readers in more than fifty locations across the country with the help of a logistics company.

“We are trying to reach out to the readers from across the country and abroad,” says Rishi. Besides, Rishi says that whenever a person thinks of a book, he wants the name of Kitab Yatra to come to their mind. “Wherever there are Nepali speakers, we aim to deliver books even if it is a single order.”

To achieve this goal, they increased their work and investment. While the work was in full swing, the outbreak of Covid-19 forced the company to stop its operations. Although the number of readers increased during the lockdown period, the government did not listd books as essential goods. So, despite the demand, they could not reach the readers for more than two months.

During the time, Kitab Yatra conducted an eight-day virtual discussion on art, literature and contemporary issues via a literary festival. According to Rishi, the videos of the virtual lit fest were watched by more than 100,000 people.

Along with the online business, the Kitab Yatra team has been giving priority to literary discussions from the very beginning. Last year, they conducted a national literary festival called Kitab Jatra. The Kitab Yatra Foundation, which organised the event, aims to hold such festivals in various cities.

“While Kitab Yatra does business, Kitab Jatra works for the development of a reading culture," informs Rishi.

Within the reading culture, activities to connect the readers, publishers and the intellectual community are conducted. This includes everything from construction of libraries to conducting festivals.

After the end of the lockdown, the founders of Kitab Yatra are trying to get back to their daily activities. However, it has been difficult for them to get back on track like other businesses. “The rhythms of life and work have deteriorated. Economic challenges have been added now,” expresses Bikesh.

In the early days, the founders would bring their own homemade lunches. They thought that at least one book could be added by saving on lunch expenses. According to Rishi, at present, the regular monthly expenses of the company, which started from Rs 27,000, have now reached Rs 2-3 lakh. This includes rent, salary of ten employees, delivery, logistics expenses, etc. Besides, the company is also repaying loans taken from cooperatives.

As an impact of the coronavirus-induced economic crisis, the company has not been able to pay its staff their full salary but has avoided job cuts so far.

According to Bikesh, two and a half years ago, they started the practice of depositing some money into an ‘emergency fund’, and money from the same fund is being used in the current crisis.

Besides, there are other problems Kitab Yatra is facing due to Covid-19 at present. The books brought from India are stuck at the border checkpoints due to the lockdown hindering the company from fulfilling customer orders. The loss of business has also led the startup’s founders to worry about the company’s debt. Even though the books are being delivered to customers in Kathmandu, it has not been same for those outside the capital valley.

But they are carrying on, despite such present setbacks.

Rishi states, “We have started working as much as possible after the lockdown was eased.” This includes preparing annual reports, compiling accounts, and designing new websites.

According to Rishi, if the government lists books as essential items, it will help accelerate the revival of the company’s business.

“The government which imposed a tax on books, has not been liberal and clear about books,” states Rishi, “The demand has not decreased as people from young to old age have the free time to read books as a result of the Covid-19 restrictions. We used to deliver around 100 to 200 parcels a day before the lockdown. Now we are receiving orders one and a half times more than that.”

However, he is also cautious that this situation may not last for long.

“Art and literature comes only after food and shelter. The long-term negative impacts of the pandemic directly affect the book business,” he says.

Despite the crisis in the book business, the possibility for online services and business is likely to increase in the coming days. Rishi and his friends are optimistic about the future of their online business in a sign that they have not lost hope in the midst of the pandemic.

Even though the company was born out of a personal interest, they have reached their current level by following a plan. The lockdown gave them time to think about the journey they have made and plan for the future.

Rishi says, “The plans made from the beginning are postponed. Now I have time to make new plans.”