SUBARU FORESTER : A Beauty and A Beast One of Subaru’s signature vehicles, the Forester has an enduring legacy and with continuous refi nement, the latest iteration builds on that rich heritage. 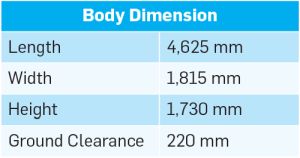 Design and Exterior
The Forester, much like other vehicles in the Subaru stable, is immediately recognisable. Subaru has crafted a unique identity over the years, and that identity is reflected in the all-new 2019 Forester, which has undergone a complete redesign on a completely different platform, enhanced with exclusive features, while retaining its core essence.

The Forester has a commanding presence, accentuated by the striking and stylish front headlamps that lie on either side of Subaru’s signature grille upfront. The subtle curves that stretch out from the front and envelope the sides add panache to what is otherwise a rugged vehicle.

On the rear, Subaru has kept things relatively understated, with the exception of the uniquely designed tail lamps that provide a bit of flair. There is much to admire about the design philosophy embraced by Subaru, it’s appeal lies in its elegant simplicity. The Forester comes across as both a rough-and-tough SUV capable of traversing harsh terrain while also retaining the comfortable sophistication one expects from a high-end SUV. In that sense, the vehicle’s design language does an adequate job of communicating the Forester’s many-pronged appeals.
Interior

If one were to choose a singular word to describe the Forester’s interior, that word would most likely to ‘spacious.’ That isn’t to say that Subaru has skimped on other facets such as comfort, convenience or style; quite the contrary. However, the space carved out on the inside is immediately noticeable as soon as one enters the cabin.

Also noticeable is the refinement in interior design. The Forester’s cabin exudes an air of luxury, courtesy of its elegantly laid out centre console, premium fit and finish, and all-around diligence in terms of design. The black leather seats are plush and comfortable. Further, they too add to the aesthetic appeal of the vehicle. The all-black colour scheme on the interior, with splashes of silver accents, contributes to a sophisticated and distinguished aesthetic.

It’s an interior that combines the best of both worlds – functional and graceful.
The Forester is jam-packed with a plethora of interior features. Below are a few of them:
•    6.3-inch LCD multifunction display.
•    4.2-inch LCD meter display with information for the driver.
•    Rear-view cameras.
•    Centre-console box with a 12V power socket. Engine, Performance and Safety
Powering the Subaru Forester is a capable 1995 CC engine that delivers plenty of power and pep. The SAWD (symmetrical all-wheel drive), available on all Subaru vehicles, is well equipped to handle the rugged terrain and roads laden with potholes. The suspension setup was required to do some heavy lifting as we cruised around the pothole-laden streets of Kathmandu, and it did a reasonable job of insulating the interior.

A feature that is unique to Subaru is its proprietary boxer engine. It’s a horizontally opposed engine configuration in which the pistons move toward each other in a horizontal direction. The result of such an engine configuration is increased durability and performance due to the engine’s flat design, which generates less vibration than other engine types. Another feature unique to all Subaru vehicles is the Symmetrical All-Wheel Drive (AWD) that facilitates improved traction on wet or slippery roads. Similarly, the Lineartronic + Active Torque Split AWD functionality ensures the engine remains in its most efficient range for smoother acceleration, improved driving performance as well as fuel efficiency. In terms of safety, the Forester is equipped with a ton of relevant features. The Subaru Global Platform enhances the overall safety of the vehicle. Another factor worth mentioning is the terrific visibility while driving, which undoubtedly leads to a safer driving experience. Further, the Forester is enclosed in a ring-shaped re-enforcement frame with high-tensile panels that provide added protection from accidental impacts.

Pricing and Conclusion
The Subaru Forester is an attractive proposition given its well thought out and impressive array of functional, aesthetic and safety features. It looks good, it feels good, it drives good; the Forester checks all the boxes and is a vehicle worthy of serious consideration for those in the market for a premium SUV.

Below are some other safety systems:
•    Steering Responsive Headlights that operate in tandem with the steering and help illuminate the path while turning during the night.
•    Supplemental Restraint System Airbags on the front, side, curtain and knee areas, 10 airbags in all.
•    Auto Vehicle Hold allows the driver to let go of the brake pedal anytime the car is at a standstill.
•    Improved X-mode
•    Electrical parking brake
•    ABS with EBD
•    Vehicle dynamic control (VDC) selector switch
•    Immobilizer (antitheft feature)
•    Electronic stabilizing programme
•    ASR (Antiskid)