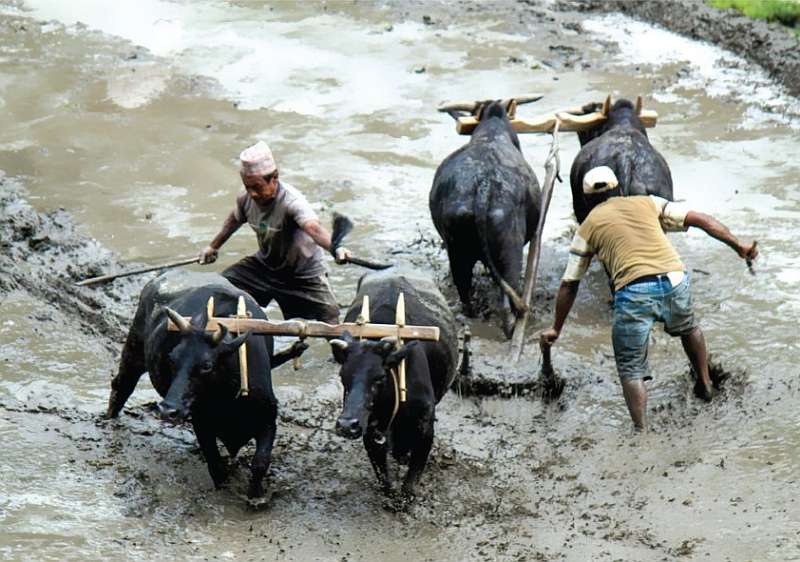 The pandemic has presented an opportune time to revisit plans and strategies to commercialise the agriculture sector.

According to data published by the Department of Customs, Nepal’s food import during March 24 to July 5 totalled 424, 397 tonnes of which were 122,679 tonnes of vegetables, 107,530 tonnes of pulses, 47,697 tonnes of fruits and 11,650 tonnes of dairy products. Ironically, the period, which marked 100 days of lockdown, was a disaster for many Nepali farmers and people engaged in agri-business who were forced to throw away or destroy their agro products ranging from vegetables, fruits, chicken and milk as they were unable to take the items to markets across the country due to the restrictions placed over the movement of people. While, farmers spilling milk over the roads and burying vegetables and fruits in the ground have been recurring scenes in Nepal for the last several years, the lockdown has yet again highlighted the chaotic supply chain management, and most importantly the absence of commercialisation in the country’s agriculture sector.

Existing Challenges in Agriculture
Lack of investment in research, fragmentation of arable lands, lack of technology, fair pricing system (commodity market), market centre and ineffectiveness of extension channels have been identified as some of the major hindrances for commercialisation of agriculture in Nepal. Besides, depletion of groundwater resources and increasing dependency on remittances among rural population have also affected agricultural production. These problems have been the reasons for indifference of people towards the sector despite immense potentials in agriculture.

Farmers’ access to market has remained as the major bottleneck in agriculture sector development. Due to this, they depend on middlemen to sell their produce. The involvement of middlemen has been a challenge for Nepali farmers as well the consumers as it increases the price by several folds. “There is involvement of around 10 middlemen when bringing agro produce to Kathmandu,” says Birendra Tiwari, agro-advisory officer at ICT for Agri, an agribusiness startup active in developing IT solutions for agriculture sector.  “The scenario would be different if they could create a group and organise vehicles to transport their produces. But they don’t have any idea about how the supply chain works,” said Adhikari who also is a producer a podcast named ‘Krishi Serophero’.

The lockdown has exposed weaknesses in supply chain and logistics resulting in huge losses to the companies who sell value added products such as dried fruits and packaged foods with expiry dates. According to agriculture and food security expert Yamuna Ghale, farmers haven’t been paid because the products aren’t sold. “Also, they are not getting further orders due to the uncertain situation,” she mentioned, adding, “Right now, when farmers are suffering due to poor supply chain management in the country, they haven’t received any extension for repayment of loans or interest rate subsidy. This is because most farmers still borrow money from unofficial lenders and not from banks and financial institutions.” The Role of Big Business Houses
In Nepal, where agriculture still remains as a subsistence activity of farmers, the growing engagement of business houses gives a positive signal. It means expansion of farmland, development of food processing industries, opportunities of export and infrastructure development for agri chain. Nimbus Holdings initiated a journey in agri-manufacturing in 2004 with Probiotech Industries which is the first pellet food manufacturer in Nepal. Founder of brands like Byanjan and Nimbus Krishi Sewa, Nimbus has always been open to adopting new trends. According to Anand Bagaria, managing director of Nimbus Holdings, the company started Nimbus Bazaar, an e-commerce platform immediately after the lockdown. “We were planning to start the operation after Dashain, but because of Covid-19, we began the operation immediately. This is giving us a lot of experience,” adds Bagaria. “Apart from decreasing the price for consumers, using technology has helped us to connect with our customers. Immediate reviews which we get from our customers in e-commerce helps us to improve our services and products.” Nimbus, which is working for sustainable measures at each point in the supply chain, is also planning to start a grain warehousing company in the next six months. Besides, Bagaria also mentions about Nimbus’s recent plan to produce healthy and nutritious ready to eat snacks.

Similarly, Golyan Group, through its brand Mato aims to offer organic vegetables at the same rate as non-organic vegetables. “The harvest in organic farming is comparatively lesser than non-organic production. However, we will lessen the cost gradually as there are no middlemen involved in between,” says Latika Golyan, managing director of Mato. “We directly work with farmers and manage all the post-harvest activities. Absence of middlemen help the farmers earn more,” says Golyan. She shares that the venture is in the process of collaborating with startups, transporters, women groups and other players in the ecosystem so that they can bring all varieties of products needed in the kitchen. “We are also looking forward to opening franchise stores of Mato. We are planning this concept so that people who have come from abroad and the ones who are interested to venture into agri-business can start their journey with the franchise,” says Golyan.

Likewise, there is Golchha Organization’s Arihant Agri Farm and Research Centre which does commercial farming of cereal grains, vegetable, oilseeds and fruits. Established in 2016, the venture is gradually on the process of farming many other crops.

Agri-Processing Should be Encouraged
According to entrepreneurs and experts, Nepal’s prospect in agri-processing is extremely high. Bagaria from Nimbus says that if we encourage agri-processing, the consumption will increase which will automatically increase production in the future. Rara Biotech’s Karki also echoes Bagaria’s sentiments. Karki’s startup has started processing Shitake mushroom. “We used to sell fresh mushrooms, but because we could not sell the mushroom during the lockdown, we started its processing,” says Karki.

Ghale views that local level budget for agriculture should be invested in infrastructures including processing, packaging, branding and certification. “If all these facilities are available at the local level, production won’t be wasted and the farmers will get fair price for their produce,” she says. Promoting Agri Business Startups
From research, post-harvest management, technology to e-commerce, many startups are working with their different strategies in the agri-business. Paincho Pasal, which started its operation in 2014 at Gulmi is working with farmers are from Gulmi, Palpa, Argakhanchi, Rolpa, Rukum and Jumla. Paincho Pasal has more than 60 collection centres. Each collection centre has been set up with accessibility for the farmers in mind. “This is why the venture’s name is Paincho, which means barter,” says Dhruba Neupane, managing director at Paincho Pasal. The company transports the collected goods including fresh fruits and vegetables to the nearby market. Also, they transport processed foods including tomato ketchup, pickle, juice, jam, nettle power and many others to different distributors all over Nepal.

Then there are biotech startups engaged in research of better plants and seeds are remedies of plant diseases. One such company is Rara Biotech which is active in research and also the production of consumable products. “Being a biotech company, we need to connect to the industries and have to produce on a mass scale. Mainly, the challenge for us is to buy technical equipment since we don’t get tax or VAT rebate for agricultural equipment,” added Sumeena Karki, co-founder and CEO of  Rara Biotech “The government hasn’t recognised biotech as an agri company and neither a medical sector. We have tried to approach biotechnical engineers for equipment production but the products were not up to the mark,” adds Karki. She says that for a startup like hers, collaboration with other biotech companies would help facilitate tangible impact in agriculture.

There are also some startups working to empower farmers through content. From providing the best price for farmers’ commodities to SMS-based weather forecasting to tips on farming of various types of crops, these ventures are working to bring convenience to farmers. Smart Krishi and Krishi Guru are two such ventures that have been working to inform and communicate with farmers through technology. Smart Krishi has reached around 3, 50,000 farmers through its app. The venture also provides paid training to farmers regarding effective agriculture methods all over Nepal. “Currently, we are organising virtual training,” adds Anil Regmi, founder and project manager, Smart Krishi.

Similarly, Krishi Guru has reached 100,000 farmers. Among them, 75 percent of users are from Nepal and 25 percent from outside Nepal, says Tiwari from ICT for Agri which has developed Krishi Guru app. Both Regmi and Tiwari say that lack of technology adoption is a major hurdle. “Because the groups we have targeted are largely uneducated, it is difficult for us to reach a large number of farmers,” says Regmi.

Finding a Collaborative Model for Agriculture Development
According to Rewati Raman Paudel, director of Prime Minister Agriculture Modernization Project (PMAMP), the project is being implemented only in 58 districts due to limitation in the budget. Apart from that, he says that due to lack of coordination in the federal government, provincial government and failure to spend budget, they face challenges in providing essential seeds and equipment to farmers.

According to agriculture officer Adhikari, the government’s announcement for the request of collaborative partners is limited to notice board of PMAMP, office notice boards and local radios. “Due to this, there are many interested people who miss the opportunity to engage in government projects,” says Adhikari. Bagaria views that the government should change this school of thought and be open towards businesses. “Collaboration requests should not be limited to announcements. Government officials should move from their comfort zone and find the type of partners they need,” he adds. “The government’s situation became quite critical when businesses did not pay the tax due to lockdown. So, the tax office had to call us and request for paying tax. This has proved that we are interdependent. So, why to hesitate to discuss partnerships and coordination with the private sector or any other players?” questions Bagaria.