Fine tuning its work philosophy and systemising its assets, the country’s newly created largest development bank has one goal in mind. To be the best. 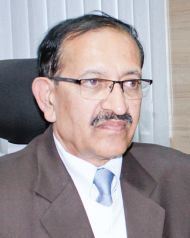 Overcoming Obstacles
The merger process underwent various difficulties. It took nine months for the two banks to complete the merger. “It was basically due to internal problems in both banks. Some issues related to the merger even reached the Nepal Rastra Bank (NRB). And, the central bank took the view that it would permit the merger only after solving those issues,” says Khanal. According to him, the merger process was even about to break at a point. Many internal and external players acted not to make the merger happen. “The period was very stressful. I  had even thought of starting a hunger strike at NRB if the process was not carried further.” Managing New System
Post-merger, VSDBL is moving ahead by effectively managing work processes, managements, governing bodies and shareholders from the two different organisations. Like other newly merged entities, managing two different organisations as one is challenging. Nonetheless, the bank has been employing strategies to smooth in day-to-day business transactions. “This is the first time I have participated in a total merger as a head of management,” says Khanal. His previous experience was when Siddhartha Development Bank, Ekta Bikas Bank and Aawas Finance merged. Khanal was the CEO of Siddhartha Development Bank and he left the bank at a time when the documents for the merger had just been signed. “We in Vibor moved ahead to bring about a successful merger by examining the merger patterns of other institutions,” he says.

“Changes are not accepted by people at first. To integrate people working in different systems is challenging,” he adds. In addition to integrating both organisations in one working system, VSDBL organised orientations, and discussions and prepared a new directive to standardise operations.

According to Khanal, compromises on different matters were made in order to make the merger happen. Employees from both institutions were assured of no job cuts and were promised that their existing posts and remunerations would remain intact following the merger. “It was an important step to facilitate the merger process and smooth in the operations of the entity post-merger,” he shares. “We have implemented the ‘right person, right place policy’ which helps to maintain the existing workforce.” After the merger, staff who were working under contract and temporary status were given the chance to stay with the organisation after passing the open competition examinations. Khanal firmly believes in the capability of the employees of the bank. “I believe in the principle that if we train our staff they will be capable,” he says. Post-merger
After the merger, the first quarter was not good for the bank financially due to the confusion over the roles and responsibilities of the staff and the differences in the thinking process. “The dissatisfaction among some people over the delegation of Credit Authority Discretion (CAD), for instance, resulted in the bank’s not so good performance,” says Khanal. Nevertheless, with regular reviews the bank solved the issues. Khanal believes that the results will be visible once the bank systemises its process and fine tunes its work philosophy.

The bank has significantly expanded its business size, reach of branch network, number of customers alongside many other elements that are ultimately increasing the bank’s capital base after the merger. “This has also increased our risk bearing capacity,” says Khanal. Along with the increased paid-up capital, the bank’s deposits and loans have totaled Rs 14.40 billion and Rs 11.67 billion respectively. Similarly, its shareholders' equity has amounted to Rs 1.82 billion. Likewise, the number of customers has reached around 125,000.

Meanwhile, its branches have totaled 42 with one extension counter and 12 ATMs which also makes Vibor Society the largest among development banks in terms of banking network. In terms of coverage, the bank has expanded its presence from the plains of Terai to the hilly region with Okhaldhunga and Morang on the east to Banke and Kushma to the west.

The bank has started to delegate Credit Authority Discretion (CAD) to the branch managers according to their capabilities, experiences and levels. Khanal says that many people were against the idea in the beginning. According to him, the bank decided to delegate the authority as there are more than 6,000 files of loans across all branches and it is not possible for the central office to process all the files practically. “The branch managers have enough time to assess the loan files in their respective branches and can correctly check them. So I think that it is an effective effort,” says Khanal. He mentions that there are no risks while doing this as the bank has a credit policy guideline with a certain format in place and the limit is fixed in Kathmandu. Khanal sees just a one percent risk from such an approach which can generate multiple returns. “We need to trust the branch staff,” he stresses. He says that many banks in the country have not delegated such discretionary authority to managers at branch levels.

The merger has made the bank focus on achieving its core objective of becoming the most competent in terms of providing services and facilities to its customers. “Prior to the merger, there was a challenge of becoming sustainable for both institutions. Now we are focusing on effectively moving the bank forward yielding good returns,” says Khanal.

To keep it in sound financial health in a sustainable manner, the bank is looking to avoid high risk credit investments. “Banks take risks, generate income by selling risks and distribute the profits to its shareholders. Every credit investment is subject to risks. It is not that we are avoiding all kinds of risks. What we intend to do is to take calculated and acceptable risks,” he shares.

Meeting the Minimum Paid-up Capital
Since the paid-up capital of Vibor Society is Rs 1.81 billion currently, it would not be difficult for the bank to raise it to Rs 2.5 billion, the minimum paid-up capital  level set by Nepal Rastra Bank for national-level development banks.  To do this the bank has plans to continue M&A with other financial institutions. However, the bank is not in a hurry to join the right shares issuance spree to reach the minimum paid-up capital, which has grabbed the Nepali BFI sector at present.  “We won’t be issuing right shares. Our own income will add 15 percent to the paid-up capital. After that, the shortfall will be of around Rs 350 million which is not a big amount,” informs Khanal. He thinks that the bank can accomplish this target by opening new branches. The bank looks to increase its access to the government funds which will help it expand its business. Last year Vibor Bank opened six branches where 19,000 new accounts were opened to provide relief to earthquake victims. “The branches with these accounts are distributing Rs 50,000 per account which will make Rs 950 million,” he says, adding, “If we can distribute Rs 300,000 per account as stated by the government, we can distribute Rs 5.70 billion.”

Long Term, New Strategies
Keeping in the mind that business growth is not going to happen only from loan increments, VSDBL has come up with a strategy to explore new income sources. Under this strategy, the bank has been trying to activate Vibor Capital or to sell it out. Meanwhile, there is also a plan to start a microfinance company as a subsidiary. “We are now trying to register a microfinance company. Similarly, we are thinking of introducing our own remittance product.” He says the bank has been planning to give merchant banking a multidimensional approach and gradually upgrading it to a mutual fund. Also, it plans to exit some of its investment while continuing to invest in others that can generate income continuously for the long term.

VSDBL has plans to start e-banking services too. CEO Khanal says that the first phase will be implemented as ‘Internet Banking for Information’. While in the second phase, the bank will go for e-banking for limited transactions. Meanwhile, VSDBL is planning to open four branches outside the Kathmandu Valley and two in the capital as part of its network expansion.

Weakness/Areas need to improve
•    After the merger, the status of the bank has changed significantly. No weaknesses in terms of financial performance.

Threats
•    Unsustainable business environment in the banking sector due to the right share issuance spree.
•    High level of competition

Opportunities
•    Immense opportunities in the market. If we are able to increase our reach to the population with little or no access to finance, our position will change dramatically.