It’s not just about the commercial aspects of bamboo for this startup; it is also about conservation. 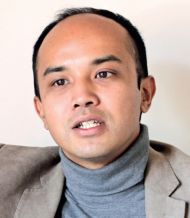 The multipurpose bamboo plant has found a special place in the furniture business in the recent years. This quick growing grass plant is garnering worldwide popularity with people looking for eco-friendly and viable furniture alternatives. With its rising commercial potential, the Nepali market is also observing a flourishing bamboo furniture trade with some inspiring young entrepreneurs striving to create a sustainable market for bamboo furniture.

Among them is Pranav Pradhan whose company Green Bamboo Creations is working to use this versatile plant in commercial ways. Pradhan says he recognised the potential of bamboo in Nepal after working for the company Himalayan Bamboo in 2010. An engineering graduate, Pradhan started his MBA when he was with the company. After picking up some ideas on production and the market, he went to London for an M.Sc in Design Engineering and Manufacturing. With more knowledge he started a plan to invest in a new company. “My idea was a follow-up to the previous bamboo business. So, I left Himalayan Bamboo. I wanted to explore the bamboo market in more depth. And I started Green Bamboo Creations,” says Pradhan. He started the company last year with an initial investment of Rs five million.

“We usually work with three types of bamboo. The Mal, Lathi and the Niigalo bamboo. We buy the bamboo from Damauli, Chitwan, Hetauda and Jhapa,” he informs. Instead of dealing directly with all the farmers, Pradhan keeps in touch with an agent in each area, who is also one of the farmers who supplies the bamboo and controls the quality in their particular areas. The bamboo is usually harvested from October to March and brought to the company’s production site in Hetauda. “The inclusive business model which we have been using since the beginning has proved beneficial for the farmers and villagers. Similarly, the 15 workers who are responsible for the production are mostly women,” he says.

Pradhan talks about how streamlining production has been the main challenge from the start. “As and when needed, we train our workers. However, many of them, particularly the male employees, leave and take up other jobs or go abroad after they become skilled,” he reveals. When asked for the reason, he says that the designing and production require a lot of physical work and creativity which leads them to think about alternatives to earn an easier living. Due to this, Pradhan has mostly hired women workers.

Cheaper than wood and cost effective when compared to plastic and aluminium, GBC uses bamboos for furniture like sofa sets, beds, dining tables, cupboards, clothes hangers, chairs, tables along with decorative items and bamboo curtains. Currently, the company is designing different customised furniture and decorative products for resorts and hotels. It is also experimenting with products such as rocking chairs and benches which are useful for schools and offices. “For residential purposes, we have been making stools and dining tables,” says Pradhan. The company has kept the price range of the products from Rs 1500 to Rs 50,000. Running into its second year, GBC is just focusing on market penetration for now. “So as to gain more visibility, we have been taking a cost to cost price approach for some products and some of them are even sold at lower price levels,” says Pradhan who designed the production machines himself, saving the startup money. Pradhan has earned more clients for GBC through personal contacts. Besides this, the products are also gaining attention via the company’s Facebook page.

Presently, the company has no wider expansion or export plans and is fully focused on experimenting on more products for different areas. “We tested the market feasibility in the first year and in the second year we are examining the scalability of the products in order to see how much market areas we can cover,” he explains.

The company was recently selected for a 100 day business accelerator programme. Pradhan is preparing plans to introduce his company more confidently to various national and international investors at the forum. “From our side, we have been doing our best to manufacture best products. But in the meantime, we are eyeing additional investments for further growth,” he says.

As a bamboo enthusiast, Pradhan believes that there is no right time when starting a business. “Business is more about ideas rather than money. People will gradually come to invest in your business if you’ve good ideas,” he shares. In addition, he also praises the growing forums of Nepali entrepreneurs. “The network of young entrepreneurs is creating quite an open-minded, helpful and transparent environment in the business sector which is giving us opportunities to learn from each other for growth in the long run,” Pradhan says.

GBC is an agriculture based industry and all the raw materials are brought from different areas within the country. “Being at the initial phase, we have much more to do in order to add value to the bamboo. We are just doing the basics, which is just a traditional mechanism. In the second phase of our expansion, we will start making compressed designs to produce products like ply bam (bamboo plywood), chaukas (frames for windows and doors) and prefab house building materials,” he adds.

It’s not only about furniture and decorative items for GBC. The company also takes bamboo conservation seriously which is revealed in its slogan “Go Green Go Bamboo”. The company is actively engaged in bamboo farming in Hetauda and Damauli. Likewise, it also assists the farmers by providing them with efficient ways of harvesting.  Pradhan is deeply concerned about the shrinking number of bamboo forests in the country which is leading to the loss of the precious resource. “Preservation of this versatile and bio-degradable material will be highly beneficial for environmental sustainability,” he stresses.