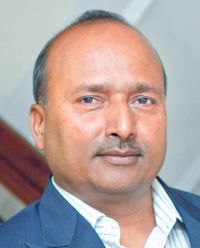 Keyal Group is a Birgunj-based business and industrial house with more than a century of experience. A small textiles trading company named Gajananda Balmukunda was transformed into an industrial conglomerate a century later. According to the Group’s chairman Satya Narayan Keyal, it all started in the textile trade by his grandfather Gauri Shankar Keyal.

“The current form of the group is the result of timely improvements in intergenerational business and the shift in business activities,” mentions Keyal. Currently, more than a dozen industries and businesses are active under the umbrella of Keyal Group and are based in Birgunj and nearby areas.

Focusing on the manufacturing of construction materials, Keyal has also proved its prominence in agro related production and the trading of imported goods. Keyal Group has moved ahead rapidly in the diversification of industries and businesses in recent years. “In the process, we are producing most of the construction materials,” informs Keyal.

Turning Point
The Group members view that with the strong participation and efficient managerial leadership of Chairman Keyal, the conglomerate has been able to take important steps in the industrial sector.

“Diversification of businesses and industries has been the key to our success,” recalls Keyal, adding, “The Saw Mill and Rice industry established by my father Gulab Roy Keyal in 1951 was our first turning point.” Both industries are still operational and the Group has also given continuation to its family business of textiles.

The major turning point for the Group was to start trading in paints and hardware in 1986 at Birgunj. At the same time, Satya Narayan Keyal planned the diversification of its businesses and industries. The trading in hardware and supply of the construction materials to the local construction materials industries inspired the Group to become involved in manufacturing.

After a decade in trading, the Group in 1994 started manufacturing different iron materials used in construction. “We faced challenges while turning from trading to the industry in the initial days. Nevertheless, the challenges have brought us to this place,” shares Keyal. The Narayani Rolling Mills operating at Chhata Pipra of Bara is now producing a full range of flats, angles, plains, squares, heavy structures such as I-beams and channels of various sizes. Meanwhile, the expansion of the Group’s business relations and branches in different places including Kathmandu and Birgunj assisted the marketisation of products.

According to Keyal, with the increasing demand for iron and steel, the Group after five years started manufacturing iron pipes and shutter door sheets. The two units of this industry are manufacturing six inch pipes at Jeetpur of Bara. He says that the sharp increase in construction activities and rising market opportunities encouraged the Group to manufacture construction materials. Apart from iron and steel industries, the Group is also involved in cement production. It owns Star Cement Industry which was established in 2005. Currently, the industry is producing three types of cements, namely Aarti Cement (PSC), Camel Cement (PPC) and Shikhar Cement (OPC).

The group has some big hardware and electronics trading companies under its portfolio. Bikki Hardware House is one such notable company that started as a small hardware store in Tinkune of Kathmandu in 1993. Today, the trading unit has grown to become a major supplier of construction materials. Similarly, Bikash Impex, Narayani Hardware and Bikash Hardware are other trading companies that are strongly contributing to the Group’s hardware business. There are 15 hardware outlets across the country. Meanwhile, the Group has also started trading medical and surgical equipment and products under the brand name ‘Hospi-Tools’.

Currently, the Group has 11 branches across Nepal including seven in Kathmandu. In the near future, it plans to open branches in Pokhara and Nepalgunj. Future Plans
The Group is further expanding its manufacturing activities. Soon, it will operate Gorkha Feed Industry to produce livestock feed pallets. “The construction of this industry is in the final stage and the production will start very soon,” mentions Keyal.

The Group is also planning to manufacture corrugated sheets. It also has plans to production of colourful corrugated sheets from Narayani Strips which will be operational in the near future.

After its success in Nepal, the Group is targeting the export market. To start with, it is preparing to export manufactured pipes and other products to India.

The Group believes in providing quality products at reasonable prices. “To achieve the objectives, our strategy is to move ahead in a planned way by being responsible to the market and consumers,” opines Keyal. Due to their high quality, iron rods and cement manufactured by the Group have achieved standard certificates.

Human Resource
At the moment, the Group is providing direct employment to 1,000 employees. Chairman Keyal views that any work can be successfully completed with the right use of human resources. “Understanding the importance of employees is necessary to motivate them by providing awards and encouragement while also making them responsible and disciplined towards their duties,” he adds.

Challenges and Opportunities
The Group has identified the severe electricity shortage as the major problem. According to Keyal, none of the Group’s industries have been able to operate at full capacity due to the ongoing power crisis.

Similarly, the small scope of the Nepali market has also been a challenge for the Group. “The area of competition is narrow due to the increasingly competitive market with industries producing the same type of goods. The market expansion is unequal compared to the number of industries,” says Keyal.

However, the Group seems to be optimistic in that with political stability and speed in economic development activities, the market itself will expand rapidly. “Now everyone should make the agenda of development their campaign to move ahead,” stresses Keyal.

I want to do any job.I have 3year experience in telecommunication..

I'm senior journalist in Birgunj, so if you want to give me any work on my personality match. Thank you !