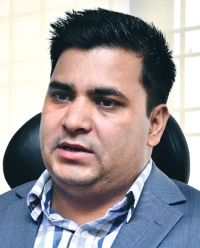 Remittance is the key source of income for many Nepali households and it is also keeping the economy of the country afloat. City Express Money Transfer has been helping Nepalis with easy and reliable remittance services for the last eight years.  Established as a licensed money transfer company in 2007 under The Companies Act, 2006 and duly obtaining its license from the central bank for financial transaction, City Express Money Transfer has become a leading remit company, making it to third position among its peers in terms of the total transaction volume.

Now in its 9th year, the company has 70 employees and around 4,000 outlets across the country. For expanding the remittance services, City Express has signed agreements with four multinational companies - Moneygram, Xpress Money, Trans-Fast and Choice Money Service - that has helped expand its network to nearly 200 countries in the world.

"Nepalis can send money from anywhere using our services," says Chandra Tandan, Managing Director of City Express Money Transfer. "We have opened our branches in the countries where a large number of Nepalis go for employment.”

The company has also signed partnership agreements with 21 commercial banks, almost all development banks and financial institutions including cooperatives and other companies for rendering remittance services. It has been providing its services from branches covering all the districts of Nepal. Similarly, it has assigned 12 agents outside the Kathmandu Valley. The company has been opening branches in rural areas continuously to provide remit services to the people living in villages.

Financial Highlights
City Express is operating with the authorised capital of Rs 500 million of which Rs 200 million is paid-up.  It has Rs 46 million in reserve and surplus. "Our overall business volume grew at a rate of 40 percent in the fiscal year 2071/72 compared to FY 2070/71," says Tandan. As per the company’s data, its shareholders fund increased by 70 percent and its fixed assets increased by around 869 percent in the last FY.

Similarly, its daily average transaction amounts to Rs 335 million. According to the company, it covers around 8 percent of the total remit transactions in the country.

Services
City Express has been providing various types of remit services with ID Remit Service and Account Credit Service as the major ones. The company notifies customers through mobile text messages and phone calls about the money which they will be receiving as remittances.

Trend
According to Tandan, a high volume of remittance enters Nepal through Saptari, Siraha and Dhanusha districts from where a huge number of people are in foreign employment. Other districts, namely Morang, Rupandehi and Sunsari also register high remittance inflow.

He says that Nepalis going to Australia, Europe and United States are mainly from Kathmandu Valley and other major cities while people going to the Middle East and Malaysia are from rural areas.

"Normally, Nepalis who are in the Middle East and Malaysia send money to Nepal, whereas people in Europe, US and Australia retain money for improving their living standards there," says Tandan. According to the company, it registers a majority of transactions from Saudi Arabia in terms of sending remittances to Nepal. Overall, Malaysia ranks first in the list of countries sending remittances to Nepal. "At present, remittance is equal to 29.5 percent of the country’s GDP. It would be beneficial if this money could be invested in productive sectors," opines Tandan.

Problems
Like other companies in the remittance business, City Express is  also facing some problems.  “Fluctuation in forex rates creates some difficulties. Value of a certain remit amount, for instance, can change instantly with the fluctuation in the USD,” says Tandan.  Similarly, complying with the different monetary and financial rules and regulations of different countries can be difficult at times.

Market Strategy
"We usually conduct marketing activities in areas of Nepal where the number of people who have gone to foreign employment is high," informs Tandan. As a part of its marketing campaign, the company uses brochures, calendars, display boards and other publishing materials in the local languages.

Awareness Campaigns
The company is also organising awareness campaigns in such areas. As a part of its awareness campaign, the company is encouraging Nepalis working in different countries including Saudi Arabia, Qatar and Japan to send their money through the official channels. Also, it is raising awareness among the remittance receivers in Nepal to open bank accounts in compliance with the new government policy to control the illicit flow of money. Nepal Rastra Bank (NRB), in the monetary policy for FY 2072/73, introduced a new policy focusing on cashless transaction. Under the provision, remittance amounts over Rs 300,000 cannot be paid in cash and is required to be paid through banking channels.

The central bank has announced the new policy in a bid to control illegal transactions. “Our agents are encouraging Nepalis to send their money through banking channels,” mentions Tandan, adding,   “Currently, 30 percent of remittance is entering through the non-banking channel.”

Anti-Money Laundering
City Express has a separate department to deal with the issue of money laundering. The main task of the department is to screen suspicious transactions. The company has opened such a department not only in Nepal but also in the source countries from where money is sent to Nepal. The department checks and verifies recurring transactions and also examines transactions above Rs 1 million.

"Basically, we focus on transaction screening. While sending money from a foreign country, if the source of income is not clearly mentioned, we stop the transaction," says Tandan. He informed that the compliance head of the company reports to central bank about the suspicious transaction list.

CSR Activities
City Express has actively supported the victims of last year’s devastating earthquake. The company offered free remittance services from Saudi Arabia, Japan and Qatar after the earthquake to assist victims to get money from their relatives in those countries.  It distributed relief materials amounting to Rs 900,000 in Likhu VDC of Nuwakot. City Express plans its CSR every year. Usually, a budget of around Rs 2.8 million is allocated for social activities. Similarly, the company is also involved in building structures at public and religious sites. Last year, the company constructed toilets in Pashupati area spending Rs 1.2 million.

Further Plans
According to MD Tandan, the company is planning to enhance remittance services in South Korea. A few months back, the Korean government announced a new provision allowing private companies in remittance services though this is yet to be implemented.  Similarly, the company plans to issue debit cards in coordination with the Investment Bank as per the new NRB directive. The central bank has permitted remit companies with a paid-up capital above Rs 100 million to issue debit cards.

The company is also planning to introduce a mobile payment system which will be handled by its sister company IT Sutra.

Opportunity:
• The company sees business opportunities in new remit markets such as Japan and South Korea with the rising number of Nepalis working in these countries

Threats:
• The conflict between government and manpower agencies has become a major problem. It is resulting in the declining number of workers going for foreign employment threatening the remit business.
• Decreasing employment opportunity in Middle East, mainly in Saudi Arabia, Qatar and other Gulf countries, due to the decline in oil price