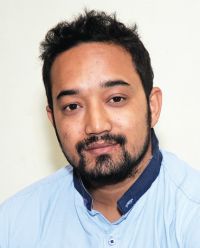 The idea for a location finder app came to Anish Shrestha (one of the co-founders) after attending an event for startups. Making an app for food, or more specifically restaurants and the best culinary deals seemed a fail-safe choice. Thus, over a short course of time Yellow Nepal App was conceptualized and released into the ever growing cyber world of the App Store.

Yellow Nepal is a free app for android phones helping people find the best food and dining experiences and deals at over 2000 restaurants in Kathmandu and is especially popular with the youth who are seen using this app more and more.

Not only has the app become successful, it was also one of the winners of the Google Business Group challenge stories last year. The Google project is aimed at inspiring startups globally.

How Was it Formed?
Yellow Nepal was formed jointly by Shrestha and three of his friends in 2013. The company they founded works on the ethos that approachability is key to success. “We are not focusing on management per se, but rather on a horizontal chain of command within a friendly environment,” reveals Shrestha. The type of management system aside, he adds that the company is “prioritizing the product more.”

Yellow Nepal was developed because the creators saw that there was a need for such an app in the food sector, which, in Nepal, is always a niche market. With a background in software engineering, Shrestha, along with another engineer friend, Manisha Karmacharya, created the comprehensive app which provides information about a specific restaurant, its overall features including the type of cuisine served, the menu, location,opening hours, contact information as well  as highlighting the best food deals in town. App Features
• Discover Restaurants; compare food choices by rating, distance, and cuisine
• Sort and map by popularity or distance within restaurant listed in app directory
• Quickly find restaurant info such as phone numbers, addresses and driving directions, and hours  of operation
•  Browse menus and photos of menu items and restaurant locations
•  Browse Online Restaurant Guides by critics, foodies, and people like you
• Easily change your location to research where to eat while you travel

Market Strategy
One major aim is to popularise the app more in the market. The company focuses on market coverage of the app in the market."We are planning to add some more activities in the app so that our users will enjoy the additional applications too," says Shrestha.

Future Plans
Shrestha points out that that some extra activities have to be added to the app. Eventually the company plans to make the app into a ‘life style app’ by adding more information about events on a day to day to basis. “It’s basically up to the Nepali entrepreneur to understand the kind of potential technology can have on their business and how it can best serve the local people. If internet access increases,  be asound market for the software business,” believes Shrestha.

Suggestions for New Startups
“Depth of knowledge in the business is essential,” says Shrestha.“One has to work in a company for at least three to four years to acquire work experience and gather technical knowledge,” he further states. Market study is also of maximum importance before starting a business.“Business without complete knowledge will lead to failure,” says this startup entrepreneur.