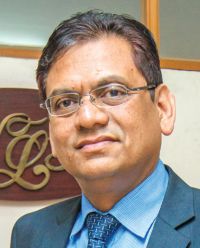 NLG Insurance Co Ltd (NLG) is one of the leading general insurers of Nepal with over 25 years of experience. Previously a composite company conducting both life and non-life insurance, the then National Life and General Insurance Company’s operations were separated in 2005, as per the Insurance Act. As a result, two companies, NLG Insurance and National Life Insurance Company were established. The company, which has a paid-up capital of Rs 100 million, has offices in 27 locations around the country. The company’s registered office is in Panipokhari, Kathmandu.

NLG Insurance is moving forward with the vision to become the first-choice insurer in Nepal. It provides services through a large network. “We have the most number of branches among insurance companies,” says CEO Vijaya Bahadur Shah. The company’s reinsurer Hannover Re is one of the biggest in the world.

Turning point
When National Life and General Insurance was divided into two entities, the employees were also divided between the two new companies. “Those employees who came under NLGI developed a defeated mentality,” shares Shah. The scale of non-life insurance was also very small, and at that time NLGI was not among the best companies, admits Shah.

He says that the turning point for the company, in the real sense, came in 2008-9 when professional managers began to oversee operations. Employees were motivated through a series of talks and discussions. “The business was improving, and the employees had to put in extra effort; without that, the company would not achieve extraordinary results,” says Shah, adding “The mentality of the employees changed and because of that we are where we are today.”

Financial Standings
The non-life market has 17 companies, including a state enterprise. NLG has a market share of 8.69 percent. The company has a paid-up capital of Rs 341.5 million. The company’s investment reached over Rs 1 billion during the FY 2014/15 and it has maintained an investment ratio of around 13 percent for the last three years.

The total premium growth rate increased by 21.76 percent in the same period, compared to FY 2012/13.

The company is professionally managed with strategic objectives to provide the best services to its clients, achieve a leadership position in the market, maintain a stable financial position and create an environment for stable growth and improvement of technology

The company believes that when employees are given rights, and are motivated, they themselves become ambassadors of the company. “Due to this, the company has a good balance sheet and business is good,” says Shah. NLG has been providing insurance services to its individual and corporate clients for more than two decades. At present, it serves almost 150 thousand clients in Nepal. “We are the number one company in terms of number of clients in Nepal,” shares Shah.

Awards & Recognitions
NLG was honored with Asian Paints Newbiz Business Award 2013 as the ‘Best Managed Non-life Insurance Company of the Year’. Vijaya Bahadur Shah was also awarded the ‘Manager of the Year’ award in 2013 by the Management Association of Nepal.

Weaknesses/Areas to Improve
• Low cost delivery
• Lead time to decrease
• Attracting best brains from going to BFI
• Awareness about insurance, increasing the insurance base and service to customers

Opportunities
1% of assets were insured, so gap between 1-100 % gaps is there.

Threats
• All insurance: Due to no hurdle in entering the market  new companies of low level may enter and ,they may not be professional player
• Re-insurance company may increase price.
• Lawlessness
• Poaching of employees by other companies.

HR & HR policies
NLG is one of the biggest companies, in terms of the number of employees. More than 150 people work as full-time employees and 450 as agents. “Insurance is a dynamic business; we have more challenges in store for us in the future. That is what makes this sector exciting,” says Shah. The company also sends its employees abroad for training. When they return, the trained employees give in-house training.

Retention
As part of a long term-plan to retain employees, the company carries out a compensation survey every two years. The company has insured its staff and provides medical insurance for family members of its staff as well. NLG provides bonus to its employees from the profit it makes. “We are second best among non-life insurance companies, in terms of profit,” says Shah. The company also provides education bonus, equal to a month’s salary, to all employees.

“Thirteen of our employees’ houses were damaged during the recent earthquake. They received help from our welfare fund, other staff and the company,” says Shah. “We have a horizontal communication system. Due to this, employees can share their problems directly with the top-level management. That is the reason why retention is high.”

Post-earthquake
Due to NLG’s tie-up with one of the world’s biggest reinsurance companies, the company didn’t face any problems in settling claims. “After the earthquake, our reinsurer called me and asked how much money we needed. I asked for Rs 30 billion, and they immediately sent the money,” shares Shah.

Out of 1233 claims after earthquake, company has settled 526 claims. Till August 17, company received the claim of Rs 860 Million out of which 140 Million has been paid to the insurer which is 16% of total claim. As the level of awareness about insurance has increased after the earthquake, Shah says that the government should encourage the public to buy insurance.

CSR
NLG provides a scholarship of Rs 100 thousand to a community school student in Karnali who secures the highest marks in SLC. Along with this, NLG has provided group accident insurance to the members of the national cricket team. The company contributes to the publication of Kalashree, an annual literature publication. Furthermore it launched the Kalashree Sahitya Puraskar last year.