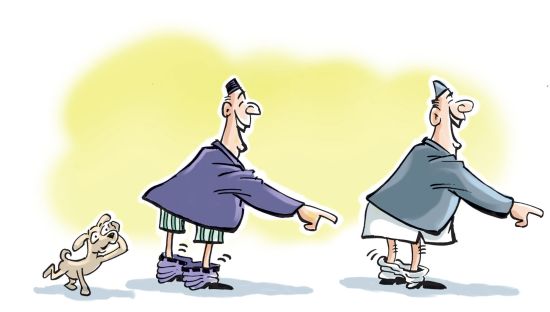 Shakespeare found out centuries ago that every lover is a lunatic. It is turning out to be more realistic at present in the Nepali context than it was in the Bard’s own days. Only a lunatic can think of falling in love, then getting married and rearing a family in this age of high prices and low humanity.
A way above from commons, Nepali leaders can in fact represent a classic inter-connectedness between love and madness. To the great amusement of Nepali people, the highest ranked leaders of the country exchange pleasantries claiming that every other leader has lost the balance of his mental frame. There is no reason people should disagree to their mutual findings. A nonclinical diagnostics is that: leaders who are so passionately in love to their country and people, as per their repeated claims, are sure to be lunatics. Go! Ask Shakespeare the Great if you still have any doubt.
A recent study in the US has shown that more than fifty per cent of her people are suffering from some form of mental illness. In this regard, there is no reason Nepal should lag behind. The prevailing scenes actually attest this.
Nepal can even surpass the US. Sample these facts: The university students of this country are involved more in vandalism than studies, teachers teach more politics than course books and are present in political rallies than in the classrooms, business people have fatal attraction to 'everything black'–money, market and suits, politicians have faith in their ability to change the party than the philosophy, police are chased by the dacoits, officials deliver goods and services away from people to some 'Virgin' locations and journalists identify themselves with political party affiliations. You can now guess what would be the percentage count of Nepali people with mental dislocation if similar survey is conducted in Nepal.
One plainly tangible feature of madness is that every mad person is highly insensitive to the plight of even his/her nearest and dearest one. Does this phenomena also apply in case of our leaders claiming themselves to be dear to people? People may die of hunger, the country may dip further into poverty, there may be pervasive injustice, chaos and anarchy, but our leaders are hardly disturbed.
People too are not less insensitive. They keep on voting the same leader again and again despite the fact that he never had delivered any good to the society or country. They believe in his repeated lies. They are prepared to leave their own field barren and cattle dead to do similar and less paying job in far worse conditions in the Middle East or Far East. Can you measure the extent of lunaticism by these fairly unconvincing traits of common Nepali people?
Let me remind you if you have forgotten that Nepal is in the process of writing a new constitution. The new constitution proposes to create federal structure with provinces of identity. If you also believe in democracy or some of our great mad leaders, every province will have the majority of the people with the same identity and they will also be given a preferential treatment in everything. If that is the case, lunatics also need a separate state with their identity assured. You may argue that one province cannot accommodate all these mad people. That in fact is a very valid argument. We can learn from the slogans like 'One Madhesh, One Province.' In the same vein, we can demand for 'One Nepal, Indivisible Lunatic State.'
It has now become easier as you don't need elected representatives in the Constituent Assembly to implement this greet vision as there is effort to write a constitution from the streets instead of CA. And one of the celebrated representatives of every mad, comrade Prachanda has already defined that janadesh (people's mandate) is different from matadesh (the verdict of the ballots). This indeed makes things very easy to make Nepal a Lunatic Federal State. It unquestionably ensures separate identity for lunatics and set a new precedent on how to federalize a new republic that has shape of a banana.