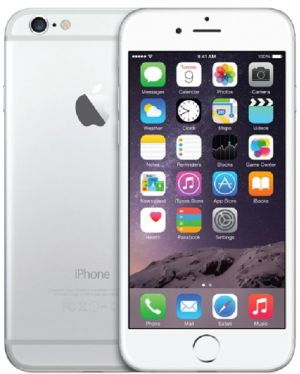 With the start of the authorised sales of iPhones in December, the US tech giant Apple is all set to take the center stage of Nepali gadget market. The much awaited iPhone 6, launched along with the phablet- iPhone 6 Plus, is not just an upgrade. The smartphone is a major revamp in terms of design, size and features compared to its predecessors and do not fall short in the expectations of the users.
With a 4.7 inch screen, the iPhone 6 is larger than its predecessor, the iPhone 5S which has a screen size of 4 inch. Similarly, Apple this time has also revamped the iPhone's overall built design by giving the handset nice curves and an attractive slim metal unibody instead of sharp edges and flat body. Weighing just 129 grams, the 6.9 mm handset is the slimmest iPhone produced till date.
The Nano-SIM smartphone sports a 326 ppi LED-backlit Retina HD display with a resolution of 750 X 1334 pixels. Though looking less in numbers than its Android or Windows Phone counterparts coming with full HD or QHD screens these days, the display of iPhone 6 is actually on-par with other high-end smartphones. Due to the higher contrast ratio and rich colours of the screen, the phone gives off spectacular displays. Meanwhile, the shatter proof glass with Oleophobic coating offers top-end protection to the phone's display.
The iPhone 6 is powered by Apple’s new A8 chipset which has a 2nd generation Cyclone 1.4 GHz dual-core processor and a M8 motion coprocessor.  The A8’s 64-bit architecture gives a huge boost to the phone’s processor despite its low clock speed. The GPU of the iPhone 6 also packs significant amount of power. The A8 SoC has PowerVR GX6450 quad-core graphics processor that delivers console quality video gaming experience to users. While the phone has just 1GB of RAM, the CPU and GPU provide the device with top class performance.
The new iPhone has superb imaging system with the most advanced smartphone camera yet. The handset houses an 8 MP rear iSight camera with a 1.5µ pixel sensor and a ƒ/2.2 aperture lens which allows users to take high quality photos. Even in low-light environments photos are excellent with vibrant colours. The camera comes with 'Focus Pixels' system which the Apple claims for faster autofocus and improved clarity to the shots. The camera has Auto HDR mode that offers natural quality to the photos. Apple has also added HD Panorama mode to the phone's camera app making panorama images look amazingly rich and colourful. Similarly, 1080p videos can be taken with continuous autofocus and better stabilisation. Likewise, the camera allows users to capture 240 fps slow-motion videos along with newly introduced time-lapse mode that comes integrated with the camera app. However, the absence of 4K video feels somewhat disappointing. The phone sports a 1.2 MP front camera that has 'burst selfie' mode allowing users to take up to 10 selfies per second. The front camera is also loaded with features such as recording 720p videos at 30fps, face detection, HDR and Facetime over Wi-Fi or cellular network.
The phone carries legacy of its predecessors in terms of sound quality. This time around users can experience its immersive sound quality not only through the earpods but also from the improved speakers of the handset.
The phone's operating system- iOS 8- hosts plethora of features. Its photo editing tools and Notification Center Widgets makes the iPhone 6 a delight to use. Similarly, mail handling system and iTunes content management are other noteworthy improvements over the earlier iPhones. The iPhone 6 has a barometer that informs users how high up they are. It helps them to record their fitness data which can be stored, accessed and analyzed in the phone’s new built-in Health app.
The new iPhone boasts fast internet connectivity. With 802.11ac Wi-Fi, the phone's Wi-Fi speeds are up to three times faster than the iPhone 5S. The phone's other connectivity options include bluetooth 4.0, NFC, USB 2.0 and A-GPS along with GLONASS.
The phone packs an 1810 mAh non-removable Li-Po battery. Thanks to the energy efficient chipset, the battery provide sufficient backup for 50 hours of audio playback, 11 hours of video playback, 11 hours of Wi-Fi browsing, 10 hours of 3G browsing, 14 hours of talktime and 10 days of standby time. Available in gold, silver and space grey colours, the 16GB iPhone 6 costs Rs 83,999 in the Nepali market. Its 64GB and 128GB variants, meanwhile, carry price tags of Rs 94,999 and Rs 107,499 respectively. Bundled with the Ncell SIM, users can enjoy free 1GB data per month for six months.