Prabhu’s emergence as a leading business sector has been recent. But its growth has been quite swift. Prabhu Group has a strong presence in 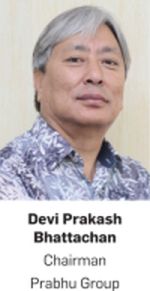 the financial sector with a first class commercial bank to its name along with a life and a general insurance company and a money transfer and a payment company.
The emergence of the Prabhu brand started after the formation of Prabhu Travels, a travel agency formed in 1990. Devi Prakash Bhattachan, the chairman of the Prabhu Group, is the man behind the group of companies with the brand name Prabhu.
In 2001, the group started Prabhu Finance and Prabhu Investment Company. Prabhu Group rose to prominence after the Prabhu Development Bank (which was upgraded from Prabhu Finance) merged with Kist Bank, Gaurishankar Development Bank and Zenith Finance Ltd to form Prabhu Bank. This was in 2014. So far, eight financial institutions have been merged into Prabhu Bank.
Prabhu Group has since intensified its business expansion. In 2014, Prabhu Technology was established which later became the first company to receive a license from the central bank for mobile payments. In 2015, Prabhu group acquired a 55 percent stake in Muktinath Airlines and transformed it into Prabhu Helicopters. In 2016, Prabhu Group acquired Growmore Merchant Bank and converted it into Prabhu Capital. In late 2017, Prabhu Life Insurance came into existence. The group already has a general insurance company under its wing.
The group has also been undertaking money transfer services through Prabhu Money Transfer since 2002. A Malaysia-based Prabhu Money Transfer was established in 2007 which was acquired by Telenor Group in May 2016. The group also comprises of a US-based financial service providing company, Prabhu Group Inc. which is led by the chairman’s daughter Shikshya Bhattachan.