March 15: Nepal is preparing to raise the issues ranging from China’s Belt and Road Initiative (BRI) to the transshipment agenda during the upcoming visit of Chinese Foreign Minister Wang Yi.

According to the finance ministry, the Chinese foreign minister is visiting Nepal to discuss Nepal’s plans under the Belt and Road Initiative proposed by the Chinese government.

It has already been five years since Nepal signed the BRI. However, the two countries are yet to finalize the projects under the BRI.

The Government of Nepal has proposed construction of roads, upgrading highways, feasibility study of Kerung-Kathmandu Railway, hydropower projects among others under the BRI framework. However, the two sides are yet to reach an understanding regarding implementation of these projects.

The two countries had signed agreements for collaboration in 18 different sectors including transport network, physical infrastructure, agriculture, hydro power, education and health during the visit of Chinese President Xi Jinping on October 12, 2019.

However, those agendas have not been implemented effectively by the two countries. The upcoming visit of Chinese Foreign Minister Wang is expected to expedite these agreements.

The finance ministry has already prepared a preliminary draft of agendas to be discussed during Wang’s visit. The draft has been submitted to the foreign ministry.

According to an official of the finance ministry, the two sides will also discuss about the grant assistance of Rs 56 billion announced during the visit of Chinese President Xi. The Chinese president had pledged the amount to his Nepali counterpart during his two-day state visit to Nepal in October 2019. The two countries are yet to sign an agreement to receive the grant from China.

The Government of Nepal is preparing its agenda to utilize the grant assistance from China for the President’s Education Improvement Programme.

Nepal will also urge the Chinese delegation for easy access of Nepali goods in the Chinese market.

Nepal is still unable to export goods to China from Rasuwagadhi and Tatopani customs due to the obstruction in the wake of Covid-19 pandemic. Even the supply of goods from China is not smooth.

Nepal’s trade deficit with China will also be discussed during the meeting, said informed sources.

The government is also preparing to sign a few agreements during the visit of Chinese foreign minister.

While the government is preparing for the agenda during the visit, finance ministry is doing its homework to resolve some issues at the diplomatic level.

Joint Secretary at the finance ministry Sewa Lamsal said that the ministry is making its preparations for various agendas including the relation between the two countries as well as business partnership. According to Lamsal, the Chinese foreign minister is likely to arrive in Nepal in late March.

“Diplomatic efforts are being made for the visit of Chinese foreign minister in the third or fourth week of March,” said a source requesting anonymity.

According to a source at the Ministry of Finance, the Chinese delegation led by Wang will arrive in Nepal on March 26 or March 27.

Foreign Minister Dr Narayan Khadka, before leaving for Turkey last Tuesday, had instructed officials of the ministry to make preparations for the visit of the Chinese delegation. Chinese Ambassador to Nepal Hou Yanqi had informed Foreign Minister Khadka about the visit of his Chinese counterpart a day before he left for Turkey.

What do experts say about the visit of Chinese foreign minister?

The BRI was initiated in 2013. Nepal faced economic blockade in 2015. Nepal decided to take part in the BRI after the blockade. Under the BRI framework, Nepal could utilize four Chinese ports while the Chinese side assured of helping Nepal in upgrading roads and to facilitate in fuel supply as well as to open 13/14 border points. However, there has been no progress in the last seven years. Experts say that Nepal must raise these issues effectively during the visit of the Chinese delegation.

Analyst Hari Rokka says that the Nepali importers are facing problems due to the supply chain disruption from China. He says that the government must take initiative to open the border as per the aspirations of the business community.

Rajendra Malla, president of Nepal Chamber of Commerce (NCC), says that there is a wide gap in trade deficit between Nepal and China. Exports from Nepal is almost nil while China is the second largest supplier behind India. He suggests the government of Nepal to raise the issue of trade deficit and to narrow the gap.

Former secretary Puroshattam Ojha also suggests narrowing the gap in trade deficit between Nepal and China. “The trade deficit is imbalanced. Nepal should strongly raise this issue during the upcoming meeting,” says Ojha.

He also said that the two countries signed agreement for transshipment of goods but the decision has not been implemented. “No one knows how the transshipment will be done. This agenda must also be included during the visit,” he added. 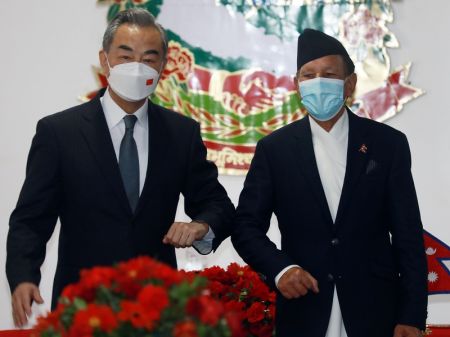